Nido’s parked up at a CMC CL at Newark Farm, just off the A76 near Sanquhar.  Despite the proximity to the road it’s a tranquil spot, with lovely views over the hills, which were clear when we arrived but have now disappeared due to torrential Scottish ‘sunshine’!  I picked this as a stopover on the way to Argyll, so tomorrow will be a bit of a transit day to get us into the Loch Lomond area.

It rained and the wind blew for most of the night, reducing at about 0430.  I managed to get out first thing for some photos, before we drove back up the peninsula to Wigtown.  This is a small market town with twelve bookshops, some small and eclectic, others very large and with a variety of books.  Cathy was in her element and, I have to say, was very restrained, only visiting three of the bookshops - clearly we’ll need to return!  Next week from 21 - 30 September is the Wigtown Annual Book Festival, so perhaps we’ll come for that next year.  I plugged in the co-ordinates for the CL, which allowed us to drive through part of the Galloway Forest Park, making up 300 square miles and known as the ‘Highlands of the Lowlands’. It was the UK’s first Dark Sky Park, due to the very low population and therefore minimal artificial light.  We stopped at the Wild Goat Park car park for lunch; no goats were seen here although we did spot some just before we pulled in.  Moving on, the next pull-over was the The Red Deer Range, a purpose-built hide from which to view the red deer.  We went armed with cameras and binoculars, thinking we’d need to be patient and view them from a distance. However, the head stag had other ideas!  He was laying down right in front of the hide, with his harem and the younger stags about 50m behind him.  Clearly he’s used to people as a family came in and the young child fed him carrots.  Onwards, we were held up due to road resurfacing, but they eventually waved us through; I wish I’d found an alternative route as on arrival at the CL I found black tar splashed up most of the driver’s side of the van.  Luckily a good spray of WD40 on a cloth got rid of it, but it took an hour to get the job done.  By then the rain was coming over the hills, so we shut the van door and I prepared a pork curry for tonight’s dinner.  As we’re on electric hook-up, we’ll charge all the things and make the most of the opportunity of water top up to have a hot shower tomorrow morning. 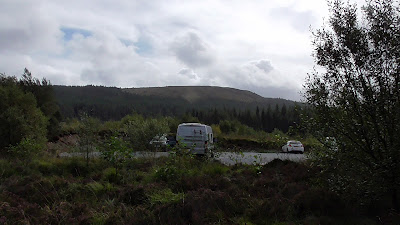 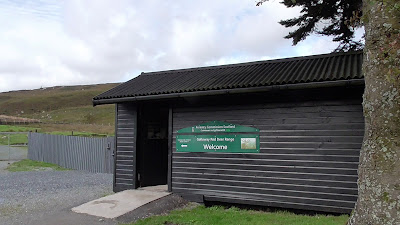 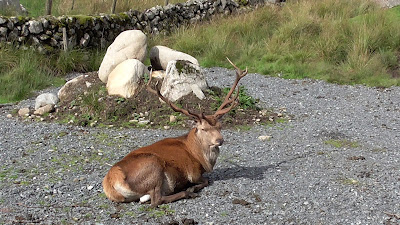 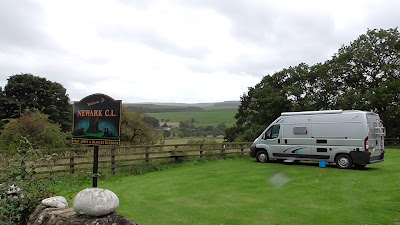