The Isle of Seil and the Bridge over the Atlantic

Nido’s wild camping just off a minor forest road, high up overlooking Loch Awe.  It’s peaceful and quiet and no doubt will be very dark tonight.  We’d just about given up on this road when a Wild Camping symbol popped up on the Sat Nav.  There’s easily room for several vans, but we’re on our own and I suspect it’ll stay that way.  Cathy’s preparing an alternative chicken dinner - a hot cooked chicken from Tesco, with potatoes and veg.

Last night was very wet and windy at Crannich Farm, but there was enough respite in the morning for me to jump out to unhook the EHU and empty the loo before we set off.  The crossing to Oban was smooth and I was soon pushing a trolley around Tesco to top up with a few bits and pieces, before topping up with diesel and heading south onto the Kintyre peninsula.  It didn’t take us long to reach the Slate Islands, which at their peak in the mid-nineteenth century quarried over nine million slates per year.  The most northerly is the Isle of Seil, which was our destination.  It’s separated from the mainland by the thinnest of sea channels, which is spanned by the narrow, single-arched Clachan Bridge, built in 1793 and popularly known as the “Bridge over the Atlantic”.  We drove to the end of the road and the village of Ellanabeich.  It’s a small hamlet with two rows of small, stone, white-washed terraced cottages crouching below the black cliffs on the western tip of the island.  This land was once separated from the mainland by a slim sea channel until the intensive slate quarrying silted it up and become solid enough over time to build on.  The small island of Easdale is reached by a tiny ferry from Ellanabeich.  It has a Folk Museum, but is more famously known for hosting the World Stone Skimming Championships on the last Sunday of September; we were two weeks too early!  Just so you know, a legal ’skim’ qualifies as a stone that bounces at least twice and the championships are open to all comers.

We parked in a free car park right by the sea.  It had a sign say no overnight camping, although several large motorhomes look set for the night.  However, we prefer to respect the signs and local’s wishes, so our plan to stay there had to be changed.  We had a walk along the two small roads with the cottages either side, past the Oyster Bar and Restaurant and down to the harbour.  After a quick snack and a brew in the van, we were off again, south down the A816.  It took a while, but eventually we ended up at this lovely spot above Loch Awe, although the rain is sheeting across the water once more - that’s Scotland for you! 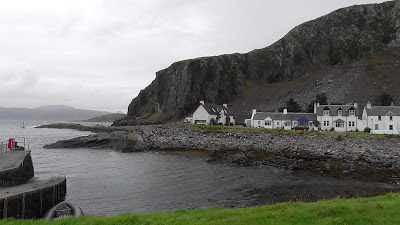 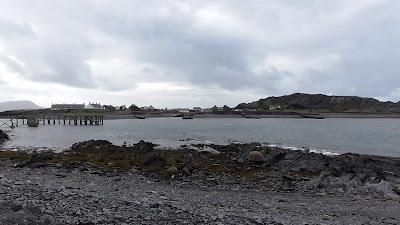 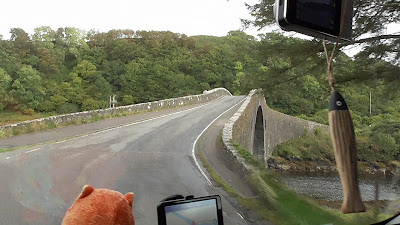