Nido’s parked up at the end of the harbour road at the Isle of Whithorn.  It’s a small village with cottages nestling around a natural harbour, where the Irish shell fishing boats land their catch.  It’s not really an isle, but more of a peninsula. It’s another lovely wild camping spot with a great view out to sea and into the harbour, although the other thing that’s wild tonight is the weather - the wind and rain is battering poor old Nido’s port side, rocking us around!  It might be some time before these posts are live as the MiFi isn’t picking up any service.  I’m not sure if it’s the unit or the data SIM, but we still have our phones for route planning and research.

We both slept well in the peace and quiet of New Abbey - a great first stop in Scotland.  After breakfast, I topped up our fresh water and replenished the 10L container at the churchyard tap, before walking down to the village shop for some milk.  A group of touring cyclists of various nationalities had stopped to take a look around the Abbey and perhaps make use of the cafe which was now open.

We left and headed south on the coastal road, soon stopping off at Drumburn Viewpoint, looking out towards where the Nith meets the Solway.  Visibility wasn’t great so we couldn’t see Skiddaw, but could just about make out the fells of Buttermere in the Lake District. There was a campervan parked up at the viewpoint, hidden from the road by a high hedge - a nice little wild camping spot.  We carried on following the coastal road, soon turning off left down to the seaside village of Carsethorn.  It has a a lovely row of cottages strung along the waterfront, with a separate garden across the road right next to the sea.  There’s a lovely looking pub called the Steamboat Inn, with parking opposite (another wild camping spot?).  Once a historic port, during the late 18th and early 19th centuries there were frequent sailings from here to the American and Australian colonies.  Just up the road is the cottage where John Paul Jones was born in July 1747.  He became a naval hero of the American Revolution and is regarded as the ‘Father of the American Navy’.

Reversing our route, the next stop was the RSPB Reserve at Mersehead, an extensive wetland and salt marsh area supporting a range of birds.  I’m not very good at bird recognition, but the whooper swans and barnacle geese were easy to spot and a large flock of lapwings were hunkered down in the grass.  We visited the two well-maintained hides and followed the trail towards the sea and along the windswept beach with the waves pounding far out in the estuary, before returning to the car park.  We dodged a few spots of rain and, as we drove on to the village of Rockliffe, it started to rain harder, so on arrival we had a brew in the van.  We did get wet walking down into the village but soon dried off in the strong wind.  Rockliffe, a tiny hamlet with a rocky bay, Victorian cottages, villas and lush gardens has an exotic feel. The 20 acre Rough Island out in the bay is a bird sanctuary and apparently can be reached on foot at low tide.  We drove on to the next village of Kippford - with its 18th century harbour used to accommodate large ships - before the 34 mile drive to our current stop on the Isle of Whithorn. On the drive here we passed Dundrennan, which is the site of the annual Wicker Man Festival (remember the film where a young Edward Woodward is sacrificially burned alive inside the wicker man effigy). The film was actually made a few miles from this location, at Burrow Head, the most southerly point of the Machars.  We also passed the village of Garlieston, where in nearby Rigg Bay the Mulberry Harbours used in the Normandy Landings were first built and tested.  Having seen the real Mulberry Harbours in Arromanche, it was interesting to see they were tested so far from enemy spies’ eyes.

Whithorn village, just a little north of where we’re parked, is known as the cradle of Christianity in Scotland. It was the base for Scotland’s first saint - St Ninian - and pilgrims still follow the trail to worship at the roofless ruins of the cathedral and then carrying on to St Ninian’s Cave, a few miles south west of Whithorn.  The pilgrimage continues to this day, with 500-600 pilgrims gathering there on the last Sunday in August every year.

Our first full day in Scotland has been really interesting. There’s so much to see and do and we’ve been impressed with the well-kept villages, with no litter and the peace and solitude - it very much reminds us of Normandy.  It’s perhaps a part of Scotland most people by-pass on the way to the large cities and the Highlands and Islands.  But I’d recommend spending some time exploring the area and we’ll certainly return.  Tomorrow we’re visiting Wigtown - Scotland’s book village (the equivalent of Hay on Wye) - where Cathy is after some second hand natural history books.  Then we’ll explore some of the Galloway Forest (well known as a ‘dark sky’ area but perhaps somewhere to spend more time when the skies are clearer), before stopping off at a CL on our journey northwards into Argyll.  Until then, it’s time to listen to the wind and rain batter the van and the seabirds crying as they try to fly through it! 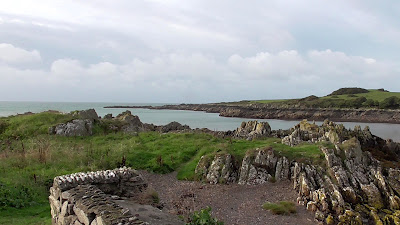 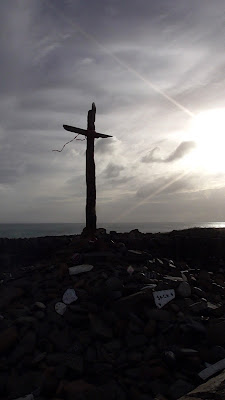 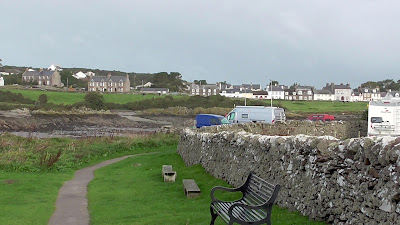 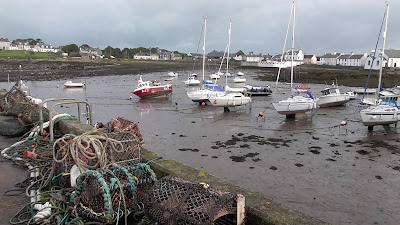 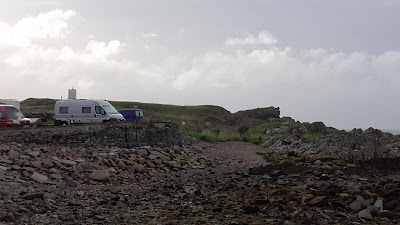