A good night's sleep and I was up at 0900 for our baguette and croissant.  It was another warm, sunny day.  Our transit was only 1.5 hours today, so we set off just after 1030 and, after stopping for diesel (Crazy Frog style!), arrived at the Aire at Wissant just after midday.  It was already quite full with only 2 or 3 spaces left and we managed to park up beside a British Burstner coach-built.  We took the footpath from the Aire and walked through the small, quiet streets down into the village square.

Wissant is a lovely little village, with a small church in the square, several small hotels and some great little bistros, brasseries and cafés.  We stopped off at Chez Nicole for a beer; I'd read this place does great Moules and it was really popular, with most of the tables inside taken up by locals - always a good sign.  We followed the road down towards the beach and popped into a clothes shop.

Cathy bought some short blue wellies to keep in Nido and I bought a polo shirt and jumper, both very much in the style of Fat Face clothing.  We returned to the van, packed a small picnic with the remaining stuff in the fridge, grabbed our chairs and walked down to the beach.
The sand is lovely and soft here and the beach very long and wide, albeit a bit windswept.  We could see the white cliffs of England quite clearly and lots of families were out enjoying the very warm sunshine.  We sat in shorts & t-shirts with our picnic and feeling the sun and wind on our faces.

Cathy had a read while I walked down to the sea, which was warm and fine for swimming - shame I left my trunks in the van!  Cathy then wandered off for a walk while I just shut my eyes to soak up the last of the sun and listen to the sea - very relaxing.  I walked up from the beach to buy us both a salted caramel ice cream, which I (almost) managed not to spill on me by the time I returned to Cathy.  We were both ready for a cup of tea by then so walked back to the van.  There are some lovely little cottages in Wissant, many of them holiday lets.  It's difficult to imagine we're just 14 minutes drive from the Channel Tunnel.  Back at the van a small conversion pulled up with a man driving, he went round a couple of times but by then all the bigger spaces were taken, so we offered to move over a little so he could squeeze in next to us.  He was an interesting chap.  A thatcher by trade he'd done a few jobs in France and was travelling down to see an old lady aged 98, an ex-customer.  She had a painting she wanted him to have, one painted by his thatcher friend who was now dead. He came from Yaxley near Peterborough and had done a couple of thatching jobs in the Hemingfords - small world.

Our faces were glowing from the day's and sun and so after a shower and change, we walked back into the village to Chez Nicole for some Moules Frîtes. We sat outside to start and ordered a drink, listening to some demented monk hanging off the church bell, but with food not starting until 1930, we moved to an inside table. This place had just two items on the menu - Moules frîtes and Jambon frîtes.  But it was clear it was very popular as many of the tables were already taken half an hour before food started.  We gave our order - Cathy had the ham and me the mussels - and also a pichet of rosé.  Pretty much everything except the food bowls, glasses and cutlery was plastic, but the service was fast and the food plentiful. My mussels came in a huge plastic bowl and Cathy's ham was hidden under a large pile of homemade chips with salad. Both were delicious and filling.  The food and buzz in this very basic café was great.  It was still warm when we paid up and walked back through the quiet, narrow streets. The stars were out and it felt like the best of British summer evenings rather than a night that was closer to November than September.  It's been a lovely last day.
Back at the van Cathy went to bed to read while I had a cup of tea and wrote up the blog.  The alarm's set for 0600 - my normal time on a work day - and we'll be up and ready for our long journey North. 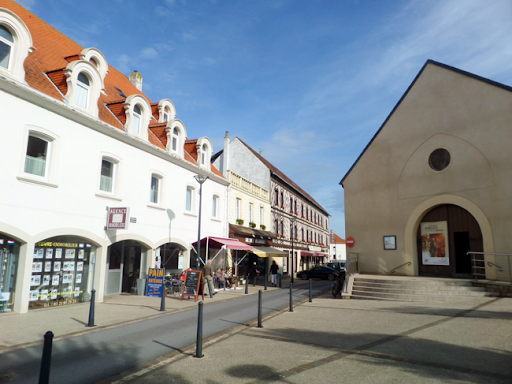 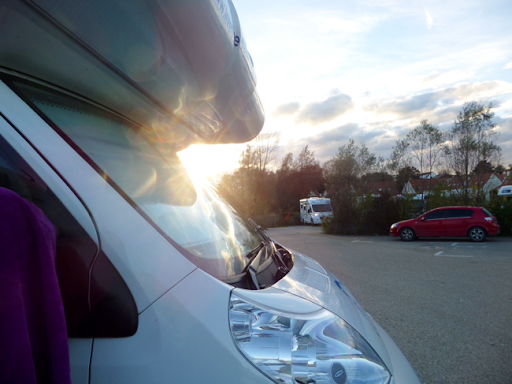