Nido’s parked up in a lovely little aire in the village of Saint-Léon-sur-Vézère, another ‘Beau Village’, with many honey-coloured cottages and narrow cobbled streets, with the river running alongside.  Once a rich inland port, changes in transportation gradually pushed this village into the background.  It’s been resurrected by tourism and, as today is another public holiday, it’s been quite busy.  Several pétanque courts are in front of us and they’ve been well used all afternoon by people of all ages.  The aire is in a small copse of open walnut trees, each with a large signed attached to the trunk saying ‘Defence de remasser les noix’, or in other words, don’t scrump the nuts!  I’ve just wandered into the village and ordered takeaway pizza; our victuals are low and the supermarkets are closed on the is public holiday.  But we’re overdue an ‘eating out’ treat.

We left Beau Rivage this morning and drove the few minutes to La Roque Gageac, parking in the aire by the Dordogne.  This is (yet!) another beautiful village, built along the bank of the river and climbing up and into  the steep cliff-face.  Since our last visit in 2013 it’s naturally become more commercialised, with lots of tourist shops and a few more restaurants.  We walked up the narrow lanes, past the botanic gardens with its palms and bananas.  It was busy so we took a footpath that climbed steeply through the forest and were soon away from the crowds.  It was another lovely walk through forest and past meadows and beautiful homes.  The circular route brought us back into the village opposite the aire.

Our drive to Saint-Léon-sur-Vézère was on small roads through yet more deciduous forest - there are literally hundreds of square miles of oaks, walnuts, sweet chestnut, hazel and beech.  We took a walk around the village, which has a number of well documented noticeboards detailing the history of the village and its buildings.  So we’ve not done much today, apart from enjoy the peace and greenery of this lovely part of France. 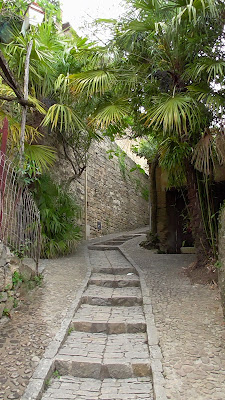 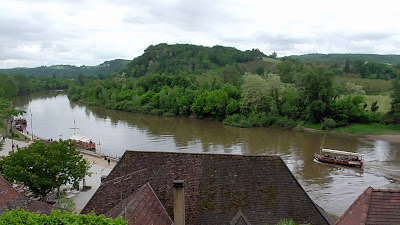 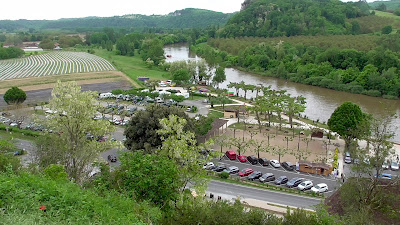 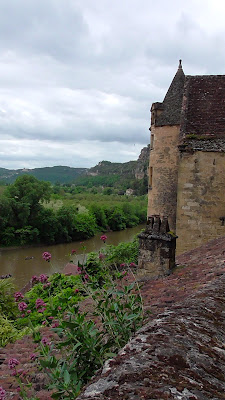 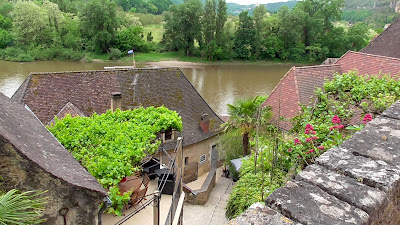 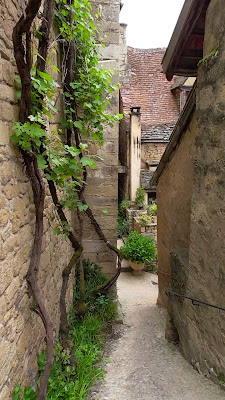 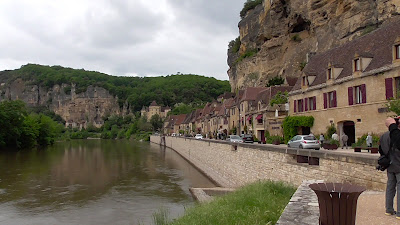 We’re still chilling out at Camping Beau Rivage by the Dordogne.  It’s been good for both of us to put down roots and do not much for a few days, particularly allowing Cathy to recover from the insect bites around her eyes.  She no longer looks like she’s been 5 rounds with Muhammad Ali!

Yesterday I went for a bike ride around some of the villages and cycles lanes, while Cathy spent some time cleaning the van, changing bedding and sorting out.  It sounds like she got the bum deal, but she really does like me out of the way when she does her ‘van slavery’!  I took the road right out of the campsite, cycling along the D703, firstly through the village of Montfort, with its imposing castle on the rocks above the river, no doubt once belonging to Simon De Montfort, who was a ‘grande fromage’ in this area.  Following the road above the river, I carried on to the next village before reversing my route and taking the bridge across the river up the winding roads to the village of Domme.  This is another medieval fortified village on top of the cliffs above the valley, with narrow streets and half-timbered houses, surrounded by high stone walls and easily defendable gate houses.  It’s clearly made the most of the tourist trade and was busy on what is a public holiday in France - the anniversary of VE Day.  Through all the villages, the war memorials were the focus for ceremonies and they all had wreaths and bouquets, with many of the old boys wearing their medals and berets.  I hope they enjoyed the lunch - they certainly seemed to be!

Down from Domme, I was back on the D703 past the campsite and onwards into the village of La Roque Gageac.  This beautiful village, on the banks of the Dordogne and built winding up and sometimes into the cliff face, is a favourite stop of ours and, given the public holiday, was very busy.  I cycled through and carried on to Tournepique, where I stopped to buy some bread and replenished with a can of orangina and a snickers bar.  Just outside the village I picked up one of the many cycle paths in France, well away from the main road, and cycled along through myriad walnut tree forests to reach the very peaceful village of Daglan, deep in the Perigord Nord countryside.  Another quintessential French village, the local bistro/cafe was doing steady business and I sat on the opposite side for a drink of water, just chilling out.  My return route took me along the main roads back to the campsite.  A really enjoyable 40 mile ride that helped me clear my head.  We enjoyed our pork, vegetables and potato dinner (cooked in the Remoska) and spent the evening watching some TV series on the laptop.

Today we didn’t wake up until 1000, which meant I didn’t have a chance to pick up Cathy’s pre-ordered croissants before the campsite shop closed!  Still, we had some bread left from yesterday which toasted well.  It was a bit drizzly first thing but eventually it dried and we had a good walk (about 6 miles) around the country lanes, past lots more walnut trees, wild meadows and farms.  We even saw an otter floating around in a lake. There were also some lovely old, remote homes.  It’s so peaceful walking around the lanes here.  Tonight’s dinner is a curry, again cooked in the ever-useful Remoska, then perhaps a bit more TV series watching, while we have electric hook up (and we’ll charge up all the gadgetry overnight).  We’re moving on tomorrow, with only a few days before we start a week’s house sit near Bourganeuf, not far from Limoges.
No comments:
Email ThisBlogThis!Share to TwitterShare to FacebookShare to Pinterest
Labels: daglan, domme, france, la roque gageac, montfort

Making camp by the Dordogne

We’ve set up camp for a few days at Beau Rivage campsite, on the banks of the Dordogne, about 3.5km from the lovely village of La Roque Gageac.  Our original intention was to stay on the aire at La Roque, but with good weather, we decided a few days in one place, with electric hook up, long hot showers and a heated swimming pool, was too good to miss.  And all for only €13 with our ACSI Discount Card.

Yesterday we stayed on a free aire right alongside the Dordogne in the village of Gluges.  It was busy, next to a large picnic site, so cars were coming and going during the day too.  There’s also a campsite adjacent, but that wasn’t yet open for the season.  It was a hot day (yippee!) so we spent most of the day sat outside reading in the dappled shade of the trees.  We also had a good spot to watch the kayakers heading downstream and a couple of fishermen in small inflatables, with their legs dangling in the water, wearing flippers; I’ve no idea if they caught anything but it looked fun!  Cathy’s still suffering with the insect bites around her left eye and that side of her face is still swollen and sore.  I roasted some vegetables for dinner, mixed into boiled rice and eaten with some merguez sausages cooked on the gas BBQ.  Once darkness fell we were treated to a ‘dry’ thunderstorm - lots of sheet lightning and rumbles of thunder but not much rain.  It cooled a little during the night so we both slept well - especially C who had been up the past few nights in pain.

This morning we had a lazy breakfast and slow start and after topping up with fresh water and emptying the loo, we only had an hour’s drive to our current location.  We’ve visited La Roque Gageac before, back in 2013 when we first came to France in a campervan.  Then I enjoyed a great bike ride and Cathy a good walk, so we want to explore a bit more on foot.  We did drive to the aire, but it was busy and hot, hence the change of plan to come to this campsite.  After setting up camp, we made good use of the large heated swimming pool, for a cooling swim and a sit in the sunshine with our books.  Now fed and washed up, I’ll stick the kettle on soon for a brew.

I’ve seen the reports of great weather back in UK for the Bank Holiday weekend and it’s made me feel homesick for our lovely house on Anglesey (C’s been feeling it for a couple of weeks).  This has been an interesting trip, but we’re missing our new home and are excited about getting back in just over 3 week’s time.  Although we’ve got a lot planned for the first few weeks back, with decorating and replacing the bathroom, we’ll also be making the most of the summer weather with the beach pretty much on our doorstep.  I’m also really looking forward to picking up my training again to become a qualified Search Technician with the Anglesey Lowland Search and Rescue Team. 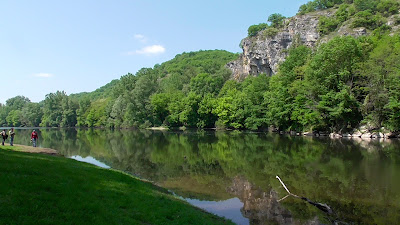