Nido's settled in the car park at the Lord Nelson pub in Burnham Thorpe, the village where Admiral Nelson was born and grew up.  He hosted a dinner here to celebrate taking command of HMS AGAMEMNON.  It's an unusual pub as it doesn't have a bar - drinks are ordered, poured in the separate tap room and bought to you.  But more about that later.

This week we're touring the North Norfolk coast and the Broads.  It's an area we visited many years ago when the children were young; we camped in West Runton near Cromer. But we wanted to return to take a look around and enjoy the empty space, salt marshes and huge skies.  We left home early and, apart from a half-way stop for a cuppa and leg stretch, kept going until we reached our first stop - Eric's fish and chips restaurant, a short way outside Hunstanton, close to the Titchwell RSPB Reserve. It had been recommend by someone I follow on Twitter - @monpetitcafe.  I ordered us some squid as a starter then haddock and chips each, all freshly cooked to order and enjoyed sat in the van.  The produce in the adjacent fruit and veg shop also looked good.  Completely full, the promised rain had started and was quite heavy, so we decided not to stop at the RSPB Reserve. A quick look at the OS map and I drove to the car park by the beach at Brancaster.

Coats and flip flops donned, we walked through the gap in the dunes and on to a vast expanse of wet sand.  The tide was way out so reaching the sea today wasn't going to happen, particularly as I didn't know the tide times, but we still took a walk out to some of the small saltwater pools.  This beach stretches for miles in both directions, past Titchwell to the west and Scolt Head Island eastwards. A good way out the wreck of the steamship SS Vina can be seen at low tide.  Built in 1894, it was originally used for trade with Baltic ports. It was sunk on the sand flats by the military in 1944 for use as a bombing practice target. Eventually the heavy rain drove us back to the van, where we sat with a cuppa, reading and listening to the wild birds (plus the rain!).  The forecast talks of drier weather tomorrow, followed by every warmer days into the week, so I can forgive a drop of rain on our first travelling day.

Back at the Lord Nelson, we sat in the small snug with wooden tables and benches. Drinks are ordered at a hatch as the beer is stored in kegs and poured direct - no pumps. We both had a Wherry beer plus a tot of Nelson's Blood - their own blend of rum and spices, the recipe being handed down between landlords. The rum was mixed certainly with cloves (perhaps a little too much) plus (we think) cinnamon and ginger.  We may try this at home but adding some black pepper for some additional kick. I stood and toasted 'The Immortal Memory' in great surroundings. Next Cathy tried Lady Hamilton's Nip - rum again but this time mixed with aniseed. The locals were very friendly and chatty and I stayed on once Cathy headed off to bed.  She missed a treat as some musicians came in after playing at the village fete opposite - violin, two guitars and a ukelele. They were also excellent singers and jammed and sang mostly folk and blue grass.  It was an excellent, unexpected impromptu night.  I tried a couple of pints of Nelson's Revenge which I think was tastier than the Wherry. It was a really enjoyable evening with friendly people and musicians who clearly love nothing better than to play and sing. 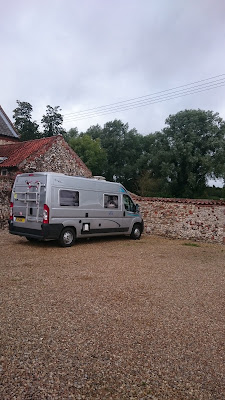 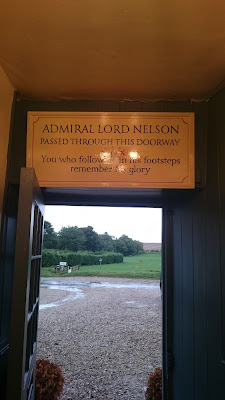 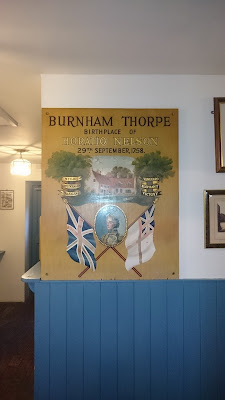