Tuesday 6 September 2016
We escaped! We were awake at 0600 and quietly dressed in our civvies, checked our forged papers, revved the engine and drove full pelt out of the main gate, crashing the barrier and dodging the guards' bullets as we fled.  Actually we did wake at 0600 but lay in bed reading until 0800! Only then did we get dressed, open up the blinds and prepare to leave.  A few other prisoners - I mean campers - were out and about, so I saved the great escape for another day. We drove a few miles down the road to the empty car park at Blakeney, reversing in at the far end.  Cathy prepared our bacon and egg buttie breakfast while I watched the various yachties arrive for a day on the water.  It was an hour and half until high tide. The water was still pouring into the creek and up the harbour at a rate of knots and, as it gradually crept up the edge of the sloping car park, I did get a bit twitchy. But with locals parking around us I felt reassured.  We walked into the village, first stopping at the Spar to buy a few victuals, then next door to the fish shop for a couple of dressed crabs for tonight's dinner. Back at Nido we made up some lunch, put water in our two flasks, packed our swimmers and a towel and started walking. The route took us along the Peddars Way and Norfolk Coastal Path, walking along a flood embankment with salt marsh either side.  It was already very hot and sunny - it was already 19'C when we escaped from Stalag 19 just after 0800. As well as seagulls we saw Egrets, Oystercatches, Terns and a Lapwing.  There was a herd of cows on the marsh and I was disappointed to see no sheep - saltmarsh lamb is delicious! The path horseshoed out towards the sea then back inland towards Cley. We could see Wiveton Hall (if you watched the series about the Hall, its eccentric owner and his attempts at increasing his income, you'll know what I mean). Once into Cley we walked past a great looking green grocers and deli before taking the path past Cley Windmill (offering exclusive B&B and self-catering accommodation)  before heading out towards the sea again. We soon reached the car park by the shingle beach, found our spot, changed and leapt into the sea - it was wonderfully refreshing our first swim in Norfolk. We swam and floated in the cool sea water and were surprised that we were the only ones. We even saw people in fleeces and coats!! We sat on the shingle drying off and eating our lunch, before changing, not easy with so many twitchers around carrying high-powered telescopes!  We reversed our route back to Cley and stopped at the Deli.  It's one of those dangerous places where I could easily spend a lot of money! But I restrained myself to some peaches, oranges, a lemon, chilli and dried pasta (to go with the crab) ...oh - and some baklava and a couple of Portugese tarts that also fell in my basket.  On the way around I tasted the various pickles, chutneys and tapenades available to try, so it was no wonder Cathy thought I'd got lost when I eventually emerged.

We continued our walk up the A149 and were soon turning into the entrance for the Wiveton Hall café and farm shop.  We'd seen the place on TV - the café and outside terrace had a great view over Cley marsh.  We only wanted a tea and coffee, but the lunch service was still going strong and space was at a premium, so we continued along the track towards Blakeney, passing the staff quarters - mainly old caravans! He has many foreign people over to help harvest the crops and work in the café and clearly he treats them well as many return for the season year after year - that and the fact that the locals don't seem much interested in crop-picking work.  I wonder what he'll do when we finally leave the EU? Back in Blakeney, Cathy made us a cuppa and we took our chairs (accompanied by my two Portugese tarts!) and sat by the creek, watching the bird life and the huge expanse of sky.

Our stop tonight is at Foxhills Campsite in Weybourne.  It's next to the Mickleborough Collection which (I think - I need to check) is a military museum.  This is a lovely site - immaculately kept, lovely large pitches with EHU and great hot showers. And several pounds cheaper than Stalag 19. So out came the awning and chairs for a cuppa, followed by long showers and sat chilling in the sunshine with a G&T and beer.  On the way here I'd stopped at a roadside stall to buy some samphire, which was delicious with our crab, chilli and lemon pasta - all washed down with an excellent value bottle of chilled Muscadet from Spar.  The baklava was also good - I enjoyed mine with a good strong coffee.  This has been a very relaxing day, which included a sea swim and something North Norfolk excels at - crab and samphire. It's a lovely warm evening as the sun sets, the crows are roosting noisily in the trees and we feel very relaxed. 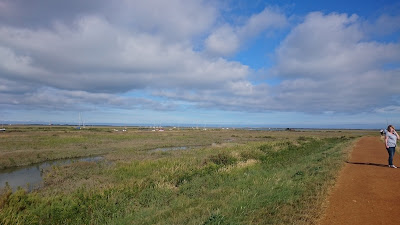 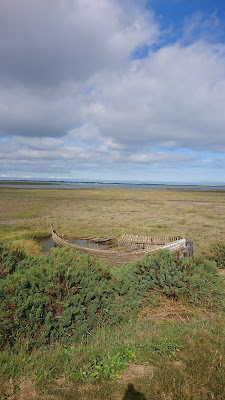