Camping in a Brickyard

Sunday 4 September 2016
Nido's parked on a large private pitch surrounded by blackberry bushes, fruit trees and deciduous woods. We're on the Norfolk Brickyard campsite, with several individual pitches tucked away. It's a quirky site, with a drop loo and an outside shower - the original was a bucket with holes in the bottom but the new one is gas fuelled, still partially outside and with a sign on rope to say it's in use - no door! The campsite was a brickyard from 1720, using local clay to make and fire bricks.  The owners have been here for 20 years and have gradually reclaimed areas of overgrown scrubland to create the private pitches. Cathy has already 'scrumped' some blackberries for pudding!

After breakfast this morning we left the Lord Nelson, with the satnag taking up some dubious, unmade farm tracks, despite being set not to. Eventually we escaped on to the main road and soon turned off into the Holkham car park.  Being such a touristy area, all the car parks charge and they're not cheap - £6.50 for this one. But we were soon through the pine forest and looking across the dunes, salt marshes and small lagoons towards the sea. We turned right and walked along the water's edge as the tide started to fall, watching the various wading birds ready to hoover up any food they could find. It was quite blowy but we were sheltered, until we crested the dunes to walk along the main beach, when the full force of the westerly wind hit us, along with the sand being whipped up! We walked through the sand and shells, past the colourful beach huts and along the path towards Wells.  The North Norfolk Triathlon taking place in the town and areas were inaccessible, so we returned the way we came and stopped at the café by the beach for a cuppa and sausage roll. By now the tide had receded quite a way so we walked on the soft wet sand, although eventually the strong wind drove back over the dunes to walk along the other side in comparative shelter. Back at the van we had a cuppa and a chat while watching the crowds of walkers come and go. It seemed very busy to us but we've been spoiled by the quiet solitude of walking and swimming at Anglesey and on the Llyn.

The rest of the afternoon was spent chilling out at the campsite, sitting out (and in when the rain passed through). We both tried out the outdoor shower - you can't beat a hot shower while listening to the birdsong and with a cheeky breeze whistling around the crevices!  Dinner was chicken pad Thai and rice, followed by rice pudding and a fresh blackberry coulis - perfect. Later we took a walk around at dusk, listening to the birds. 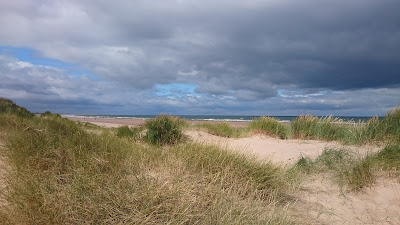 Email ThisBlogThis!Share to TwitterShare to FacebookShare to Pinterest
Labels: norfolk