I've just returned from day two of the Agile On the Beach conference.  All four of us (Chuck, Rob, Dan and me) really enjoyed and we have some ideas for improvements when we get back to the office.  It was a lovely sunny but slightly chilly morning as I cycled the Cornish lanes to the Tremough Campus.

But during the day the weather turned to heavy showers, which meant Cathy spent her day in and around the van.  But she read two books, learned some more Spanish, listened to some music (thanks Frank & Mandy - the speaker's great!) and cooked dinner, so when I returned the van was lovely and warm and the food in the oven smelled delicious.

My commute back to the van was interesting to say the least.  Coming out of the campus it was a lot cooler and it had clearly rained, but the roads were either gently steaming or dry.  The first half of the ride was fine but when I turned off to head down the last steep, narrow lane, I could see some hail on the road.  As I descended the hail was thicker and thicker, with rainwater pouring down the side of the lane.  As I approached the bottom of the hill there were cars stopped in the lane that clearly were struggling to move through the ice.  In some places the hailstones were 2cm deep and at the bottom it was at least 10cm deep, including quite a lot of water!  I stopped to take a few photos before carefully making my way up the hill, carefully cycling in the gully with water pouring down it.  More cars were parked in the lane so I had to walk around them. At the top of the lane, on Maenporth Road, there was a large traffic jam as cars struggled to move.  On the final descent to the campsite the water torrent had washed away most of the ice, but it was still quite slippery.  I stopped again to take a photo of the field by the road completely white, with all fields around it unaffected. Returning to the site I locked up the bike and entered the warmth of the van.

We've eaten now. (Cathy did the cooking!) The starter was our own home grown, huge pomodoro tomatoes, with goat's cheese, rapeseed oil, black pepper & Anglesey sea salt.  The main was a delicious stew of chicken, tomatoes, leek, red peppers, carrot, giant white beans, rosemary and hot paprika, cooked slowly in the oven.  With some oven baked bread rolls and a glass of wine, it went down very well. We're now sat, feet up, glass of wine, music in the background, listening to the rain. The forecast for tomorrow is heavy showers, but I'm sure we'll head off for a walk to the beach or along the coast. I've just the washing up to do then no doubt I'll soon be asleep. 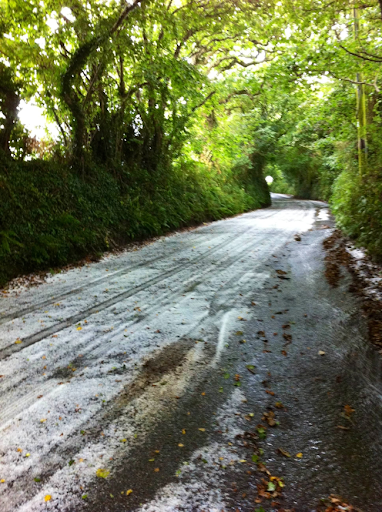 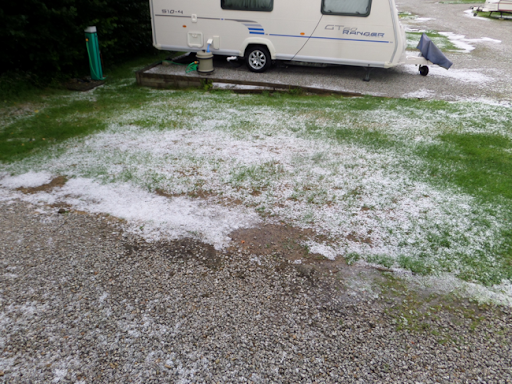