Pimping Up the Van!

The world has changed since we spent a month in France during the heatwave of 2019.  Last year, we only managed three short trips away; in fact Nido has only travelled 550 miles in the 12 months since February last year.  It's an indicator of all the sad things going on in the world.  We'd already planned to stay in the UK in 2020, but never did we imagine how even local trips away wouldn't be possible for several months.

There's no way of knowing when we'll be able to return to our beloved France and further afield in Europe. I'm quite sure it won't be this year and hope it will be 2022, but the way things are going, it could even be 2023 before we can cross La Manche again.  So, for now, our trips will have to be UK-based.

The van has sat on the drive all that time, with the odd movement to start the engine and rotate the tyres.  During the various lockdowns, we could only walk our dog - Salty - from the doorstep, with even our beautiful local beach out of bounds for several months. Thankfully, we can now travel further and, since writing this post, we've had a trip away to Llandrillo and are currently spending a few days away in Pembrokeshire (in dreadful cold and rainy weather).

During home confinement, I've also been watching YouTube videos of other motorhome/campervan travellers and converters.  My favourites have included:

Jits into the Sunset

Watching these has motivated me to make some minor changes to our van, just to personalise it a little and brighten it up. Unlike Lou of Camper Vibe, I'm not great at DIY!  But with Cathy's help (who's a bit more persistent than me), we've completed a few small projects:

The Citroen Relay dashboard is narrow and slopes away. We like to sit in the cab seats looking out at a lovely view and it would be even better if we had somewhere to place a drink and food, be it a cup of tea and a bun.....or an aperitif and some nibbles!  I had some scraps of wood in the garage so made up a basic tray, which is fixed to the fold-down clipboard that's connected to the dashboard.  We ordered a large copy of a photo that Cathy took in Tarifa of some of the street art and I covered this with perspex.  This has given us the perfect place to sit and enjoy the view with a drink: 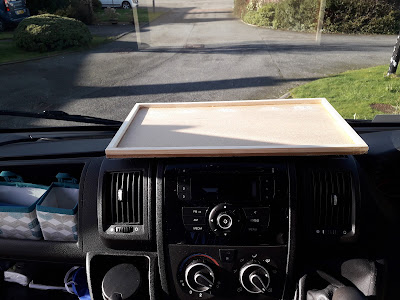 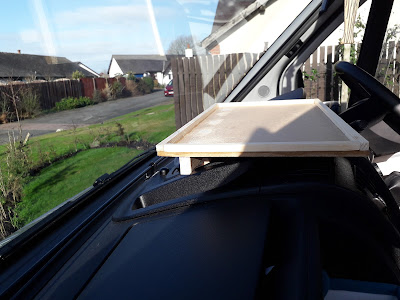 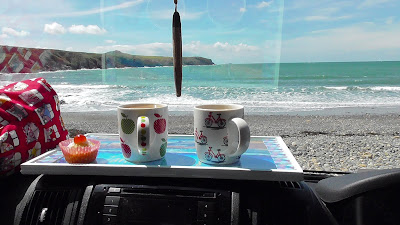 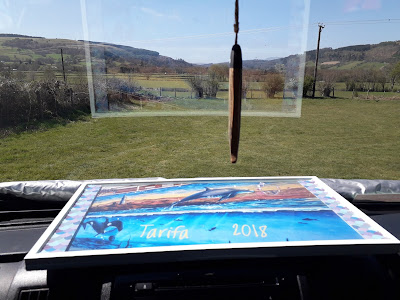 Folding table
We love our van but it's quite small and food prep space is limited.  We've seen lots of panel vans with a fold-down table at the end of the galley unit, by the sliding door.  I bought some folding table brackets online and used an offcut from the kitchen worktop that was being installed at home (the builder kindly cut it to shape for me).  This folding table has transformed the usable space in the van, for food prep, washing up and as a shelf for our laptop when watching films in the van. 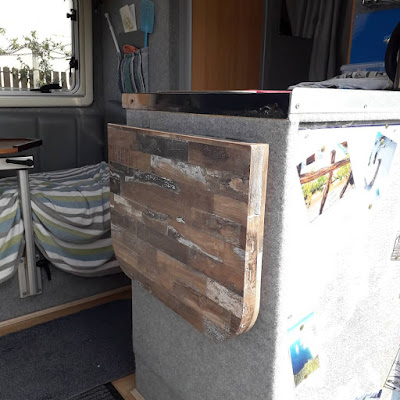 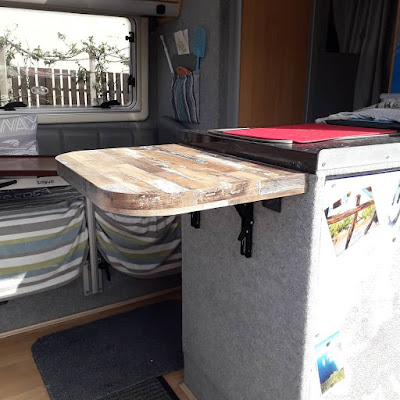 Europe map and photos
On the back of the galley unit there was a folding table that could be used outside when the sliding door was open.  It was good idea, but the leg was detachable and not too secure and if we were on the levellers, the leg was too short, so the table wasn't level; it had to go.  I had a laminated map of Europe in the house which I used for trip planning, and Cathy had taken loads of great photos of our favourite places over the channel.  I cut down the map and Cathy pinned some photos to it.  I bought a large piece of perspex and fixed it over the top of the map.  It's really brightened up the back of the galley unit and added a point of interest when the sliding door's open. 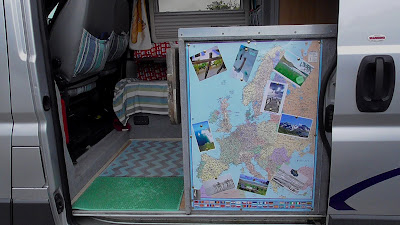 The area below the cab roof storage was looking a bit tatty, with the grey 'felt carpet' starting to fray.  We wanted a way to add some photographs to this area to personalise and brighten up the van and also a frame for some USB fairly lights we'd bought.  I measured up and made a template out of MDF and my neighbour, who works as a joiner, used this to cut a piece of oak veneer, which fitted perfectly.  Once oiled and screwed in place, we added some photos (which we can swap and change) and fixed the fairy lights behind it.  We've also added a few photos to the cupboards to brighten up the inside. 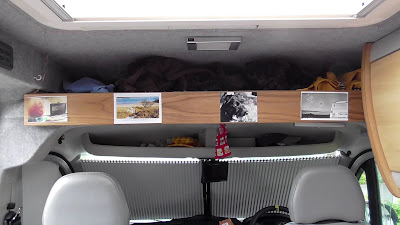 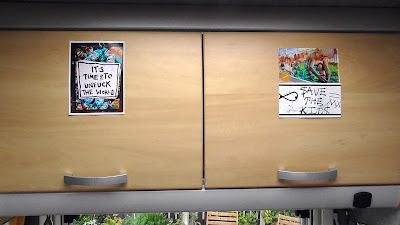 Above the bench seat we had a power unit comprising a 240v socket, 12v 'cigarette lighter' socket and a TV aerial socket.  We've never had (nor wanted) a TV in the van, so this was redundant.  Like most people, we have myriad electrical items that need recharging during a trip and the majority use USB cables.  It was a simple job to purchase a replacement unit to give us two additional USB sockets in place of the cigarette lighter socket and remove the TV aerial.  I kept the 240v socket as this comes in handy if on hook up (we have three other 240v sockets in the van).  The final tweak was to add to two sets of fairy lights powered by USB; one set warm white and the other coloured lights.  I have a USB rocker switch so we can switch them on and off easily and this has added a bit of mood lighting to the van. 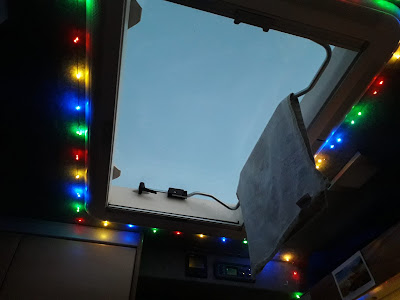 These small changes have personalised and brightened up our van and we're pleased with the results.  At a time when we couldn't travel far, it also lifted my spirits to be in the van doing something useful!

The next trip to France is being planned, perhaps a tour of Brittany or maybe head further south to our favourite areas around the Charente Maritime department.  Whenever that next trip comes, it'll be for several weeks and we'll be so happy to return to a country we love and which embraces motorhomes and campervans  But, in the meantime. we'll have to be happy with trips around the UK, ignoring the weather (and it's tipping down outside a CL in Pembrokeshire as I type this!)....that's Van Life.