Vers on the Lot

The weather’s better today and is forecast to improve gradually over the coming days.  I know I bang on about the weather but, living in a small van, it pretty much dictates what we do for the day and whether (no pun intended) we spend any time outside the van, or are cooped up inside, when three paces will get you from one end of the living space to the other.

Anyhow, we slept well at Puy L’Eveque and walked down to the small market by the Marie, just a few minutes away.  We bought some eggs plus some fruit and veg and another delicious loaf from the artisan boulangerie (Cathy snuck in a strawberry tart too!). We dropped these back at the van before walking down through and around the narrow streets and steep steps of the medieval centre of this small town, down to the river.  Our next overnight stop in Vers was plugged in but on the way we saw a sign for “Le Lac Vert”, so detoured off.  We passed the lake and drove through the small village of Catus.  Just as we were leaving I saw the small village market and noticed an aire over on the right, so we doubled back and parked up.  It was a lovely spot right in the heart of the village and by a small stream and weir, the stream leading down to pass the lake.  We followed the path down and walked around the lake before finding an old road leading up the hill through old oak trees and wildflower pastures.  It was a lovely walk, plenty of flora and fauna and no humans - just how we like it!  Back at the van we enjoyed an early main meal and a brew.  We thought about staying over, but we’d seen all we wanted to and carried on to Vers, although there are some lovely walks based around Catus, so we’ll probably return.

Vers is a lovely quiet village on the banks of the River Lot, with the D662 road running through.  The village is between the river and sheer, very high limestone cliffs that tower above the road; this is typical along the whole valley and we’ll explore more over the next few days.  The aire was a bit difficult to find; we found the area, but the actual parking spot wasn’t obvious.  We’ve parked on what was the old tennis court next to the closed railway station, with the platform just behind me and the railway lines beyond that.  We walked around the village (which didn’t take long) and up a steep path to a viewpoint looking over towards the river.  A few circular walks start at the church, so we’ll give one of those a go tomorrow.  As we walked around, we came across the quintessential sight of the locals playing boules (or pétanque) down by the river.  On the way around we found the municipal campsite, right down by the river.  It only opened for the season today but already had several vans on it.  This is an ideal location for walking and cycling, so we plan to move to the municipal campsite tomorrow and stay there a couple of nights.  I’ll have a cycle along the D662, which lies at the bottom of the cliffs and follows the river through several villages, with overhanging rocks and tunnels.  It’ll give me a chance to check out our next stops and even possible wild swimming spots if the warm weather does show up.  Tonight we’re staying on the aire; we’re currently the only van here but experience has shown that others sometime show up later in the evening. Someone is supposed to come around and collect the €5 fee - they’ve not arrived yet (now 2030) so perhaps they’ll come in the morning, but not too early I hope!  PS - Cathy enjoyed her strawberry tart with a cup of tea, sat on a wooden picnic bench on what was the station platform. 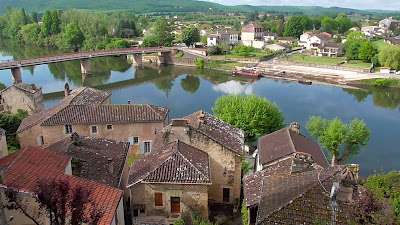 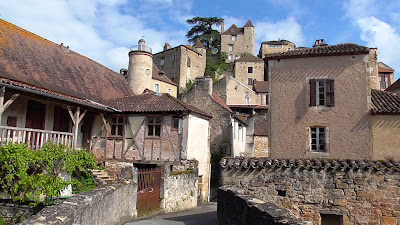 Nido’s parked up at a free aire in the lovely hillside medieval town of Puy L’Eveque.  I say it’s lovely as that’s what the guide book tells me.  I don’t know it’s lovely because we can’t leave the van for long….because it won’t stop raining!  We’re getting very bad cabin fever now, having been stuck in the van pretty much full time since Saturday afternoon.

It started to rain heavily late on Saturday night and continued all through yesterday.  Given this, there wasn’t much point in moving on, so we stayed in Castelsagrat.   The rain stopped for a while around 1600, when we snuck out to blink in the daylight and stretch our legs.  Even on our circuit of the village the rain started again - torrential, cold, sideways rain that soaked us from head to toe.  And for anyone that’s travelled in a campervan, you’ll know the misery of trying to dry clothes in a living space of 4m x 2m.  As we weren’t on electric hook up, after two stationary days and with zero sun to power our leisure battery via the solar panel, we had to conserve energy, so no heating.

This morning the rain continued as we drove first to upload and unload fluids back in Montjoi, then find a garage to fill up with LPG, before driving to the aire at Castelnau Montratier, adjacent to a line of four old windmills on top of the hill above the village.  We attempted a walk but…you guessed it.  It was pretty remote, the small village road was surprisingly busy and locals kept driving in and out of the aire for some reason, so we moved on.  The Puy L’Eveque aire occupies part of a large open car park.  The Gendarmaire Nationale station is across the way, so we shouldn’t get any problem from the chavs in their ford fiestas that plagued the last stopover.  Cathy cooked a lovely, hot one-pot dinner.  I contributed by walking out (yes, in the rain!) to buy some delicious bread and bottle of Cahors wine - well we are in the Cahors region after all.  So it’s another early night with a good book; we’re starting to run out of things to read.  There’s supposed to be a small market here tomorrow so if the weather gods allow, we hope to pop down to buy some fruit, vegetables and meat and take a look around what appeared (through the rain) to be a beautiful medieval hill-top town.  Did I mention it’s not stopped raining…….? 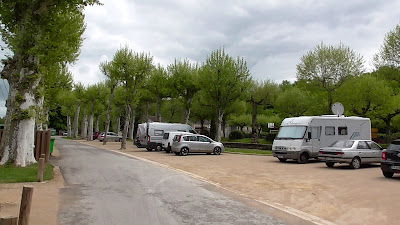