Isle of Iona and Fidden Beach

Nido’s parked up on a grassy mound overlooking the white sandy beach at Fidden Farm.  The sun has just set through the clouds and below the rocks and cliffs in the distance and the wind has dropped.  This is a lovely spot, a well-used campsite with a mix of vans and tents, all pitched close to the beach and facing the sea.  There’s a new facilities block with toilets and hot showers, but no EHU.

We were up and on the beach at Uisken at 0730 this morning; the rain had abated and we enjoyed a walk on the sand as the tide returned.  Our next stop, the ferry terminal at Fionnphort, was just a few miles away.  It was raining again when we arrived and we had to wait about half an hour for the ferry, but at least we were in a warm, dry waiting room, with a great view over to Iona.  The ferry crossing was only about 15 minutes but was a bit lumpy.  Iona is just three miles long and just over a mile wide.  It’s been a place of Christian worship for more than 1400 years and still has a vibrant religious community.

The rain was here to stay this morning, so we were glad of our waterproof coats with peaked hoods.  We walked around the ruins of the fourteenth century Augustinian nunnery, disused since the Reformation.  We took the road North, passing the large Iona Abbey and stopping off at the eleventh century, St Oran’s Chapel, Iona’s oldest building.  It stands at the centre of Iona’s sacred burial ground - Reilig Odhrain, which is said to contain the graves of sixty kings of Norway, Ireland, France and Scotland, including Duncan and Macbeth.  It’s also the final resting place of John Smith, the Labour Party leader who died suddenly in 1994 - a very peaceful spot.  Carrying on along the north road, past crofts, homes and hostels, we came to lovely white sandy beaches and turquoise waters.  It was still raining hard but it didn’t spoil the beauty and serenity of the place.  Back in the village we stopped to warm up and dry off with a hot drink and shortcake at the Iona Heritage Centre, before visiting the adjacent museum.  Had it been a better weather day, we would have walked over to the Machair, on the west side of Iona, to the evocatively named Bay at the Back of the Ocean, a crescent of pebble and shell-strewn beach and with a spouting cave to the south.  We’d then have continued on to the south of the Island to visit Port a’ Churaich (Bay of the Coracle, aka St Columba’s Bay), the saints traditional landing spot on Iona. But the weather was a bit wild so that’ll have to wait for another visit - and we will return.

The return ferry trip was kinder; the wind had died down and the rain stopped.  Fidden Farm campsite was less than 2 miles away, so (while our wet things dried in the van) it didn’t take long to get set up and head off for a long walk on the beach, through the rock pools and over the many large gatherings of seaweed.  The sun made the odd appearance - enough time to throw our shadow but not long enough to warm us up!  So the rest of today was spent in the van, reading, eating and looking out at the view.  Cathy stepped out to take some sunset photos, while I sat in the van, watching a pod of dolphins far out by the cliffs through my binoculars.  It’ll be another quiet night with no artificial light, so proper dark. 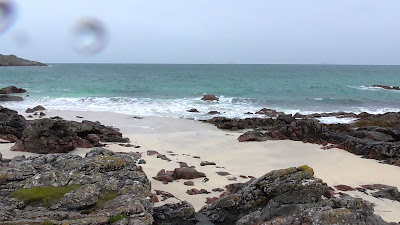 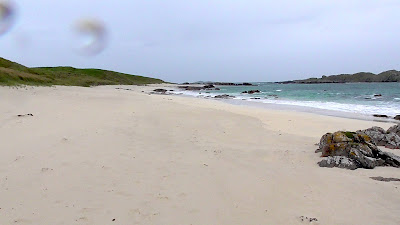 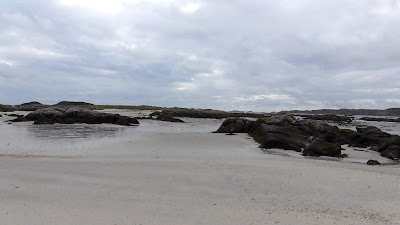 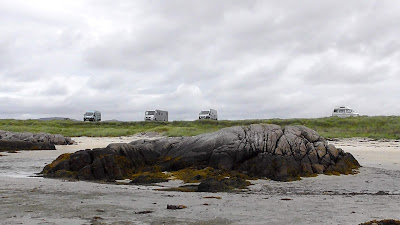 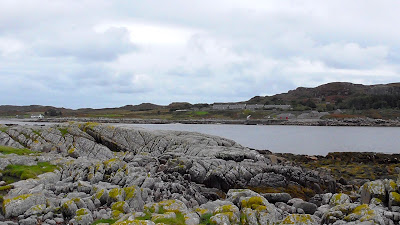 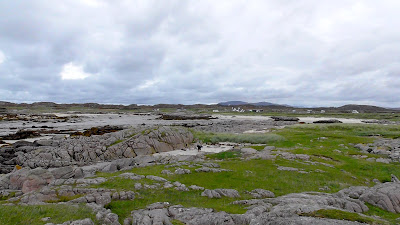 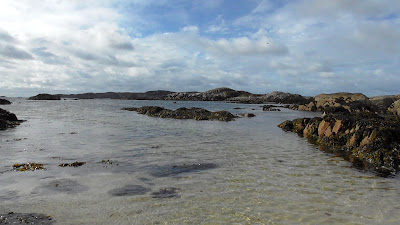 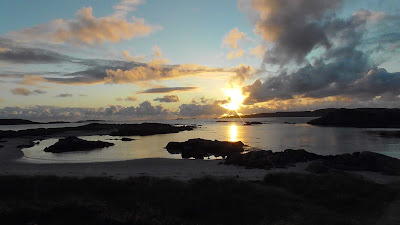