Well, today was a good day - Nido came home!  It's been a long journey from delays, being ripped off, finding someone to fix it and starting the journey of two court cases, which remain ongoing. But after a few false starts he was ready for collection.  I was home early from work and we went down to the unit at 1600.  As we drove in we could see Nido outside - his awning was out and under was a table, two chairs, a bottle of Prosecco and two glasses! Roger and Gary met us and we knew it would be good as they were wearing beaming smiles.  With a small glass of bubbly in hand, we inspected the outside of the van, including the garage area and everything within it.  Inside the van they'd laid the table and, with EHU attached, Gary showed us how everything worked.  The whole refit had been done really well and it showed in the quality of the work.  We are really happy with it.  Inspection done, I went in to pay up and talk to Roger about booking in for the last few jobs, including (most importantly of all!) fitting the bike rack.  And with that we took El Nido home.

Back at the house, the next couple of hours were spent bringing box after box of stuff down to load into the van.  We didn't worry too much about where it went for now, as we knew it would take several reorganisations before we had everything where we wanted it.  It had been a long day and much stress had been relived and relieved.  Van loaded up, at least as best we could, we cracked open a bottle of champagne, cooked a quick pasta meal and headed off to bed.  We had a busy weekend ahead of us. 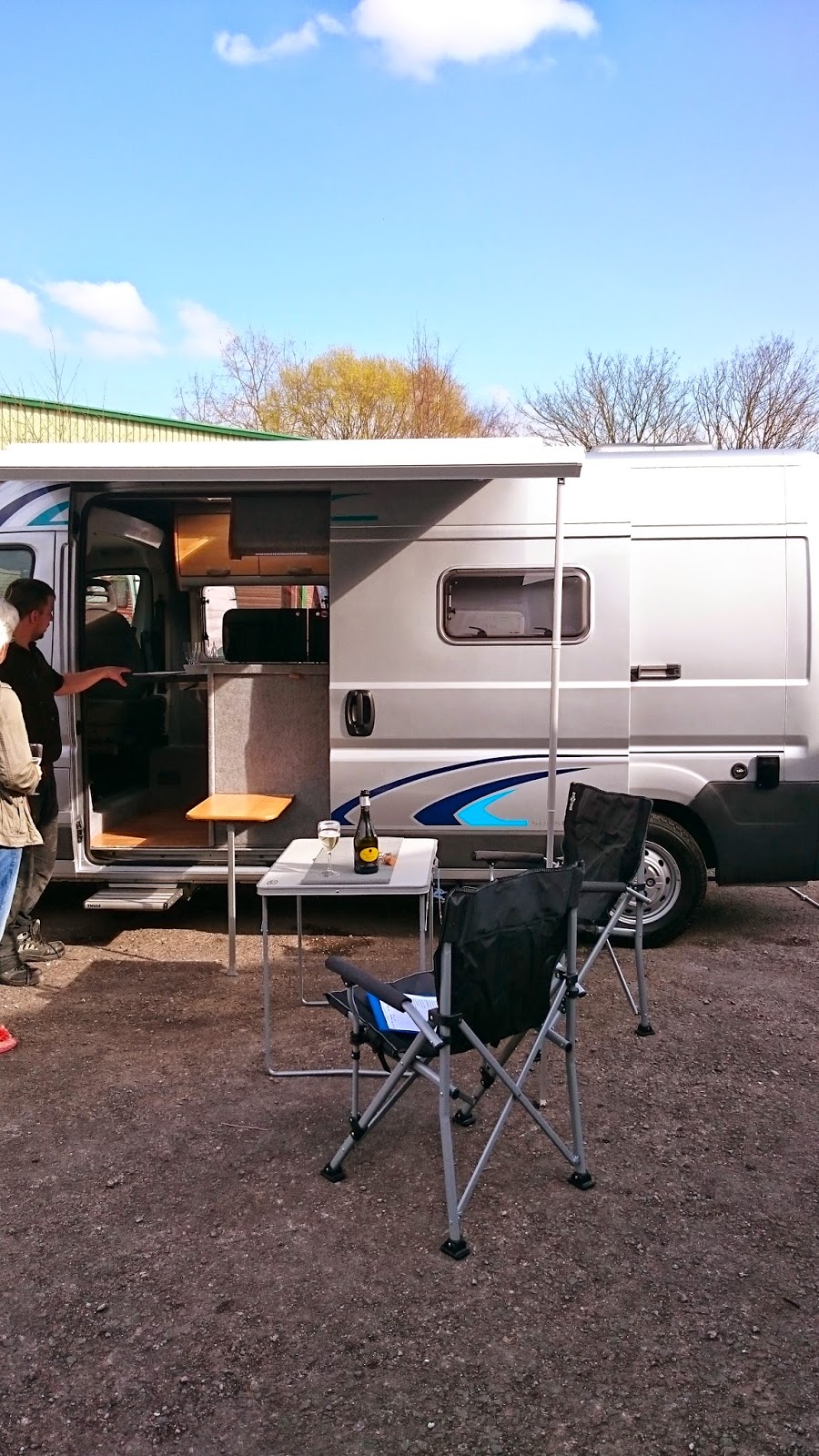 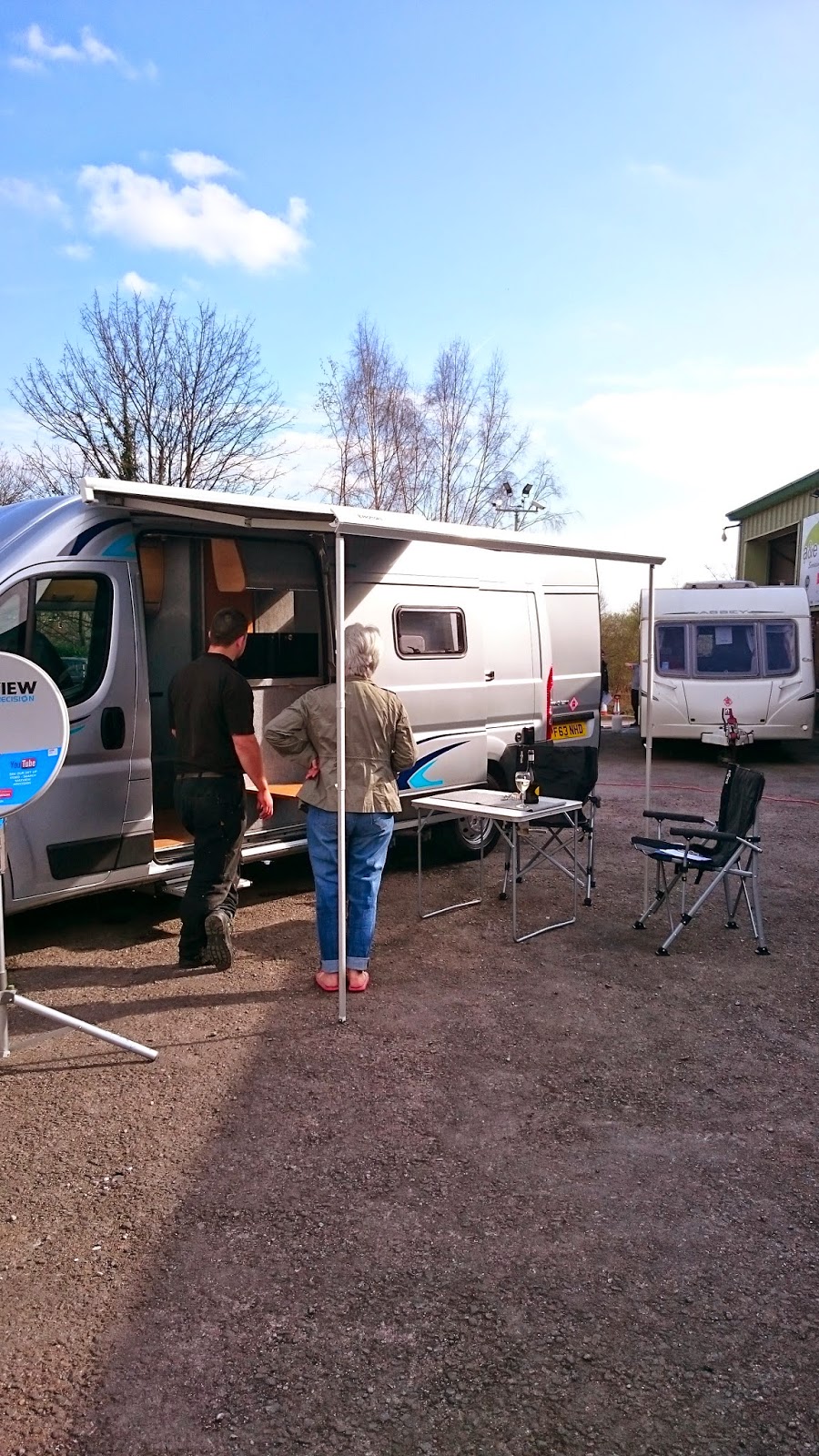 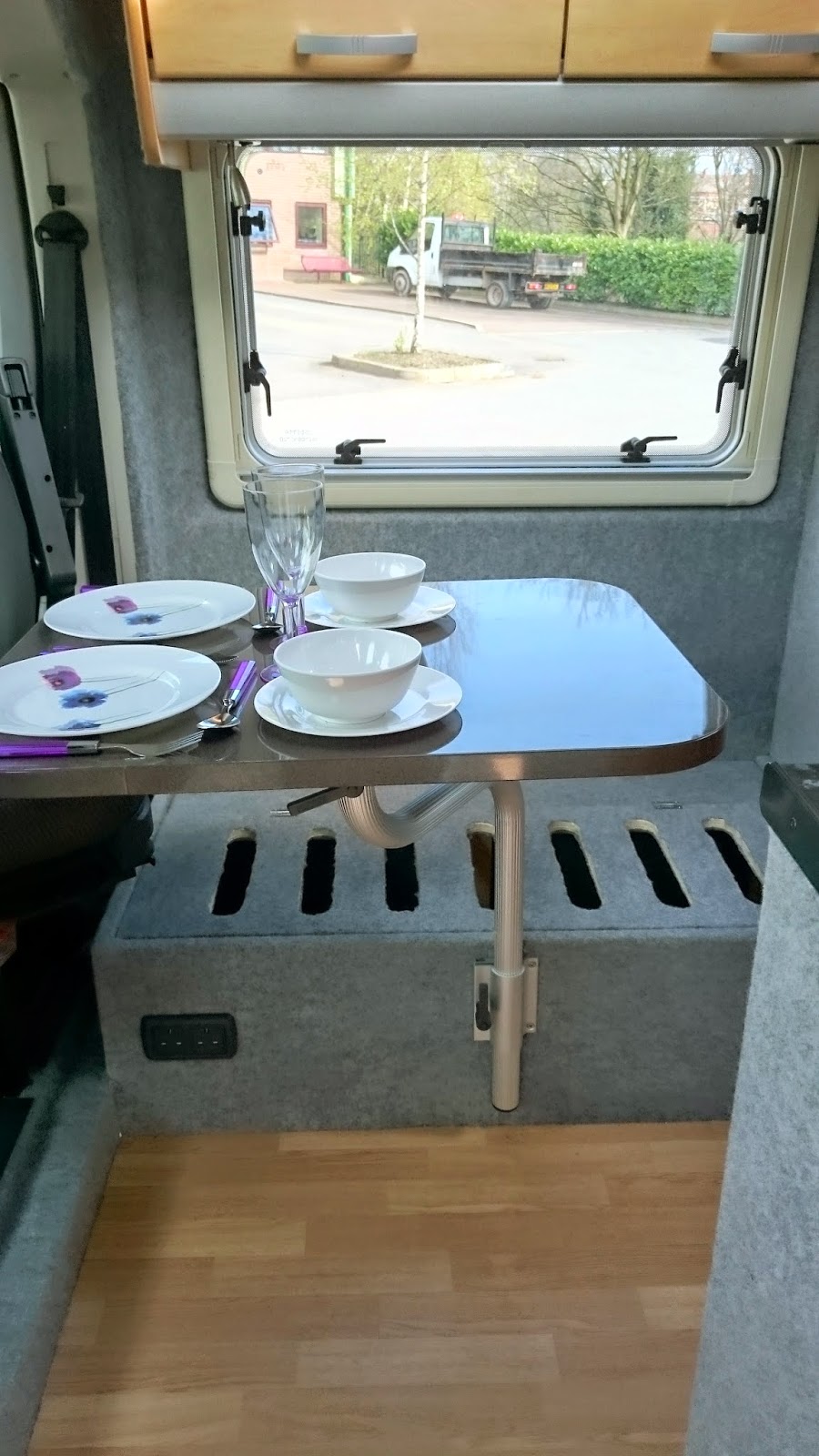 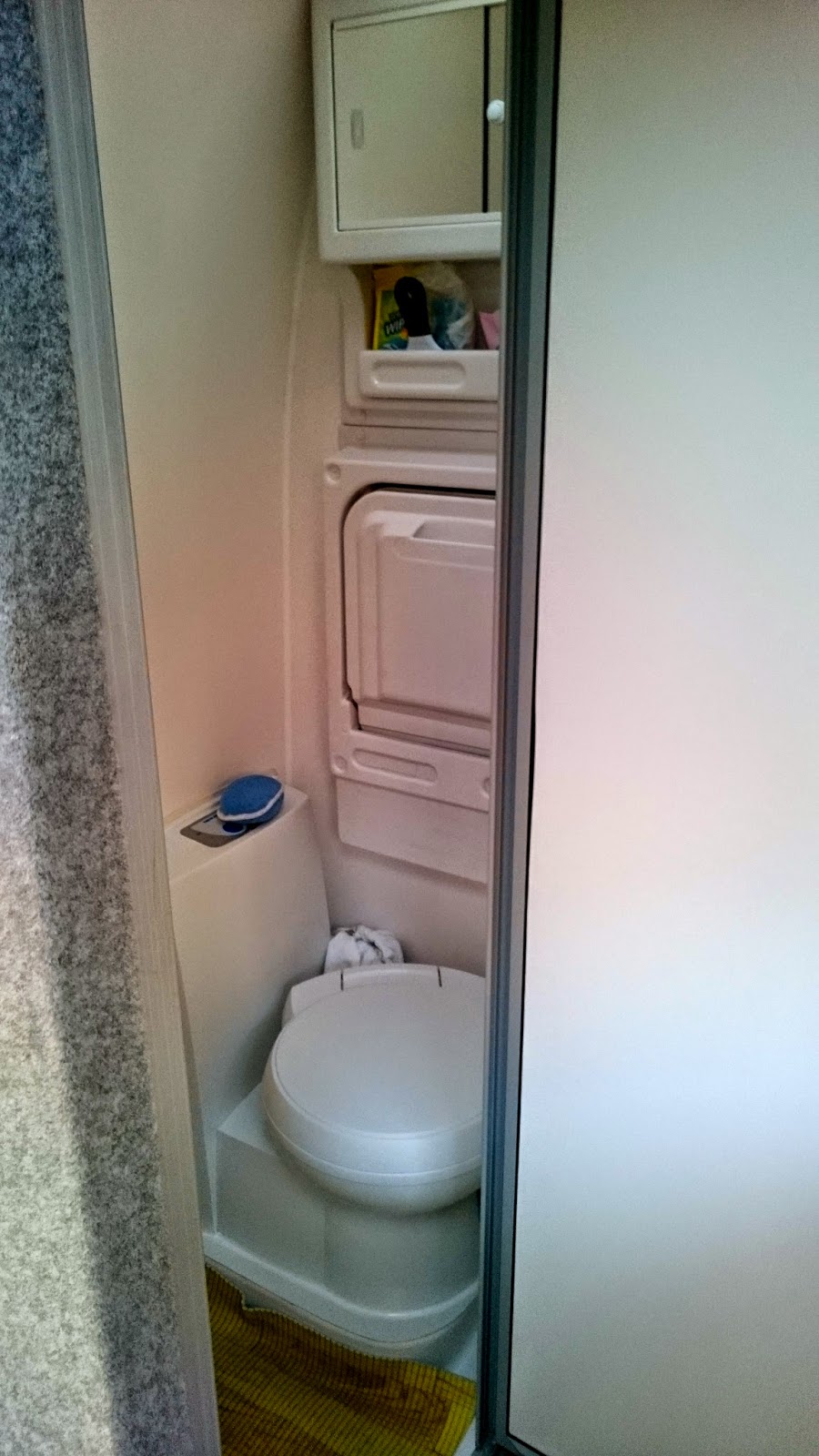 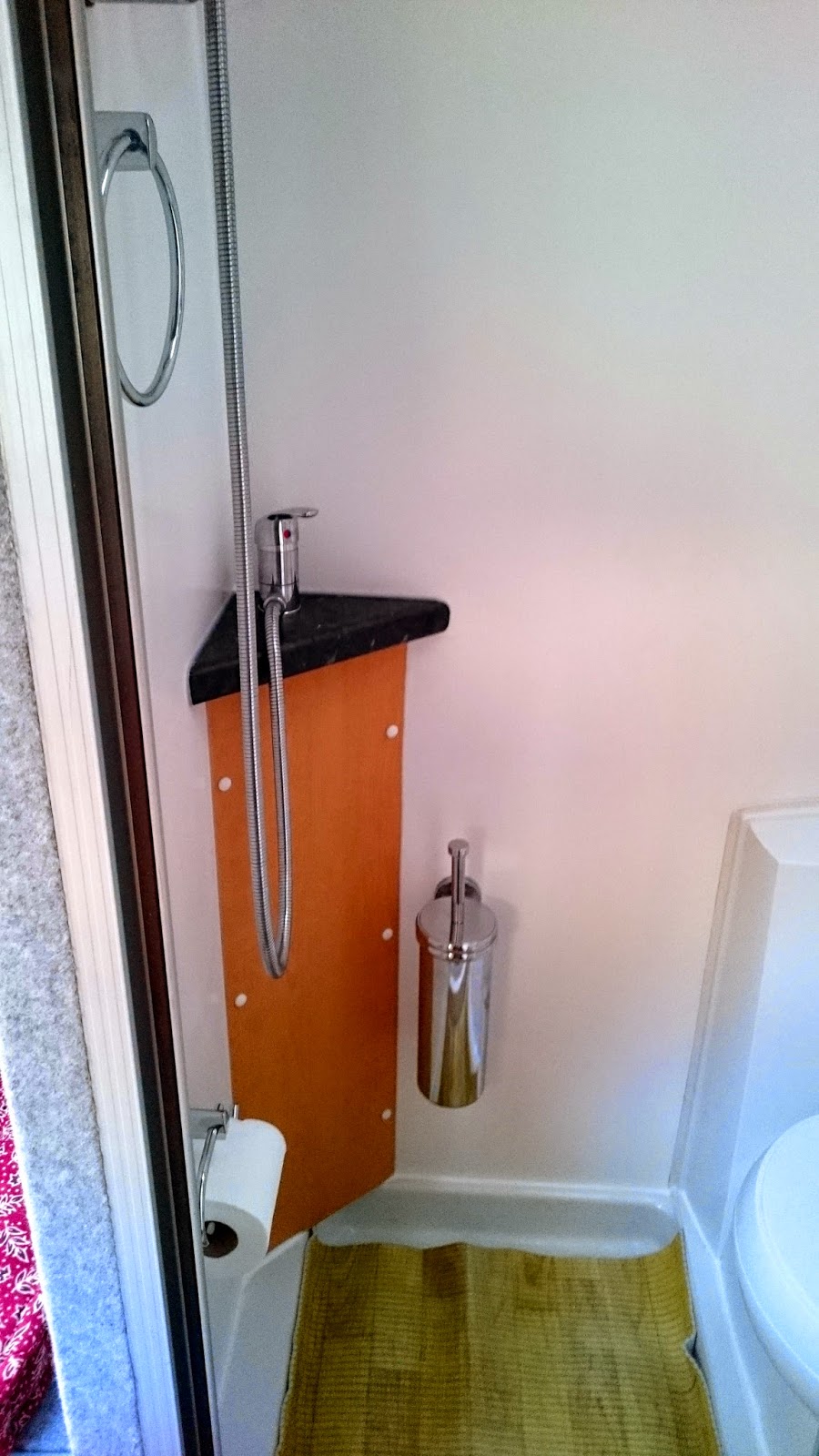 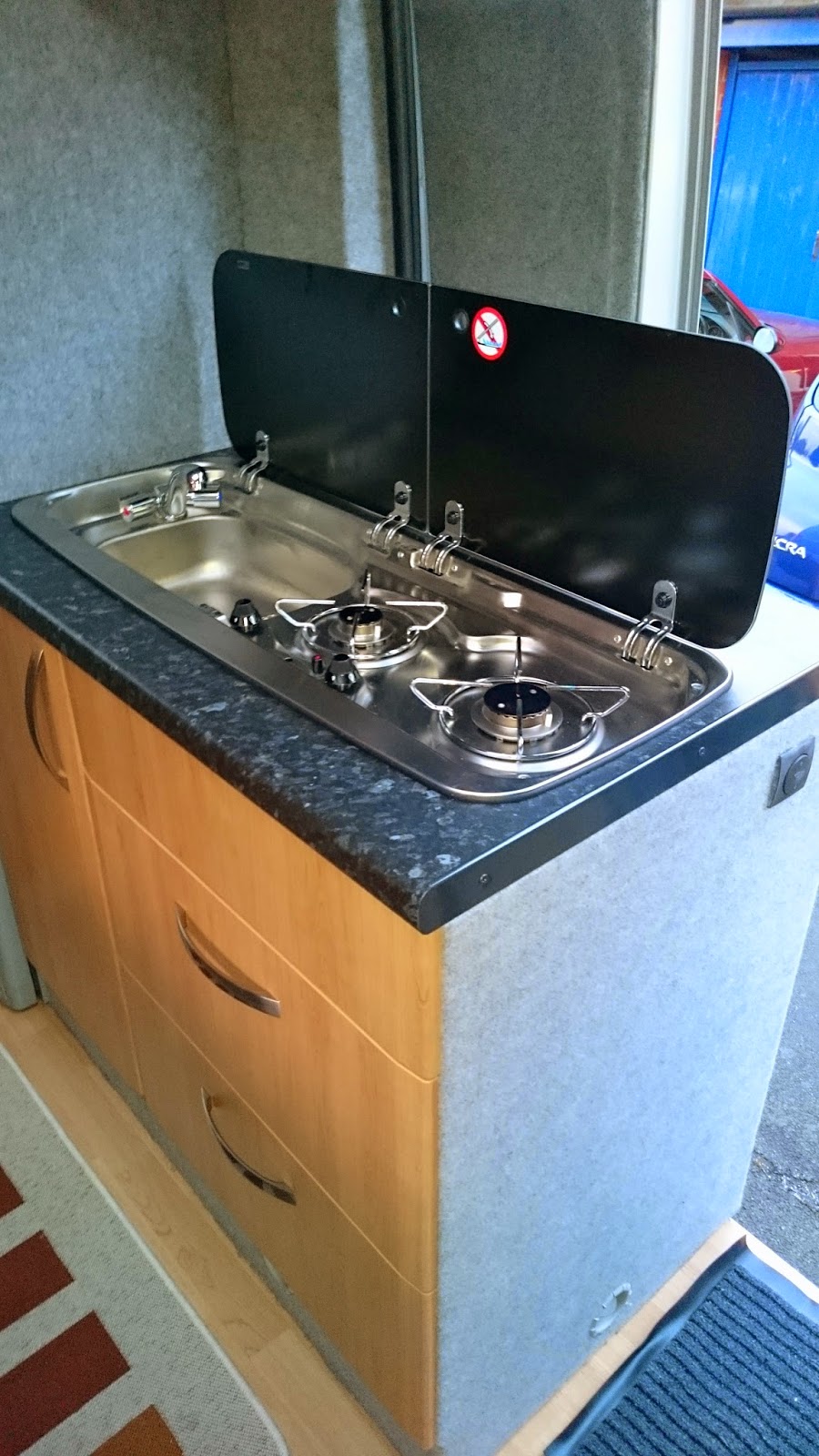 Friday 17 April 2015
We didn't sleep much last night - too excited I guess.  After breakfast we loaded up with clothes and food, checked everything was secured and headed off on our first proper trip in our very own campervan - off to meet Myrtle's Mates at the National Motorhome Show in Peterborough.

We arrived at about 1230 and, despite the efforts of the marshals who kept insisting we did circuits of the show ground, we turned into the MMMMU pitch and parked behind Nellie, Julie & Bob's campervan.  Most people were already over at the show, although Christine, Alan and Maddy the Labrador were there so it was good to catch up with them. Eventually most of the gang returned and it was lovely to see them all and show them around Nido.  After settling in and a brew we wandered off to take a look around the show. We had a shopping list of items and found most of these, plus some extras!  Back at the van we had another sort out (I said we'd do this a few times!), before fetched some fish and chips for our first proper meal in Nido.

That evening we took our chairs and some booze across to the Myrtle Marquee.  It was a cold and windy night but the banter and laughter was as good as always.  We also got to meet Ali & Mike Kingston, who have full-timed in their Citroen Relay for a few years and blogged about it on their very informative website.  Ali has also written a couple of books about full-timing which I already had on my kindle.  They had some interesting tales to tell.  Cathy headed off quite early to bed as she was shattered and I followed about an hour or so later, ready for our first night sleeping in the van. 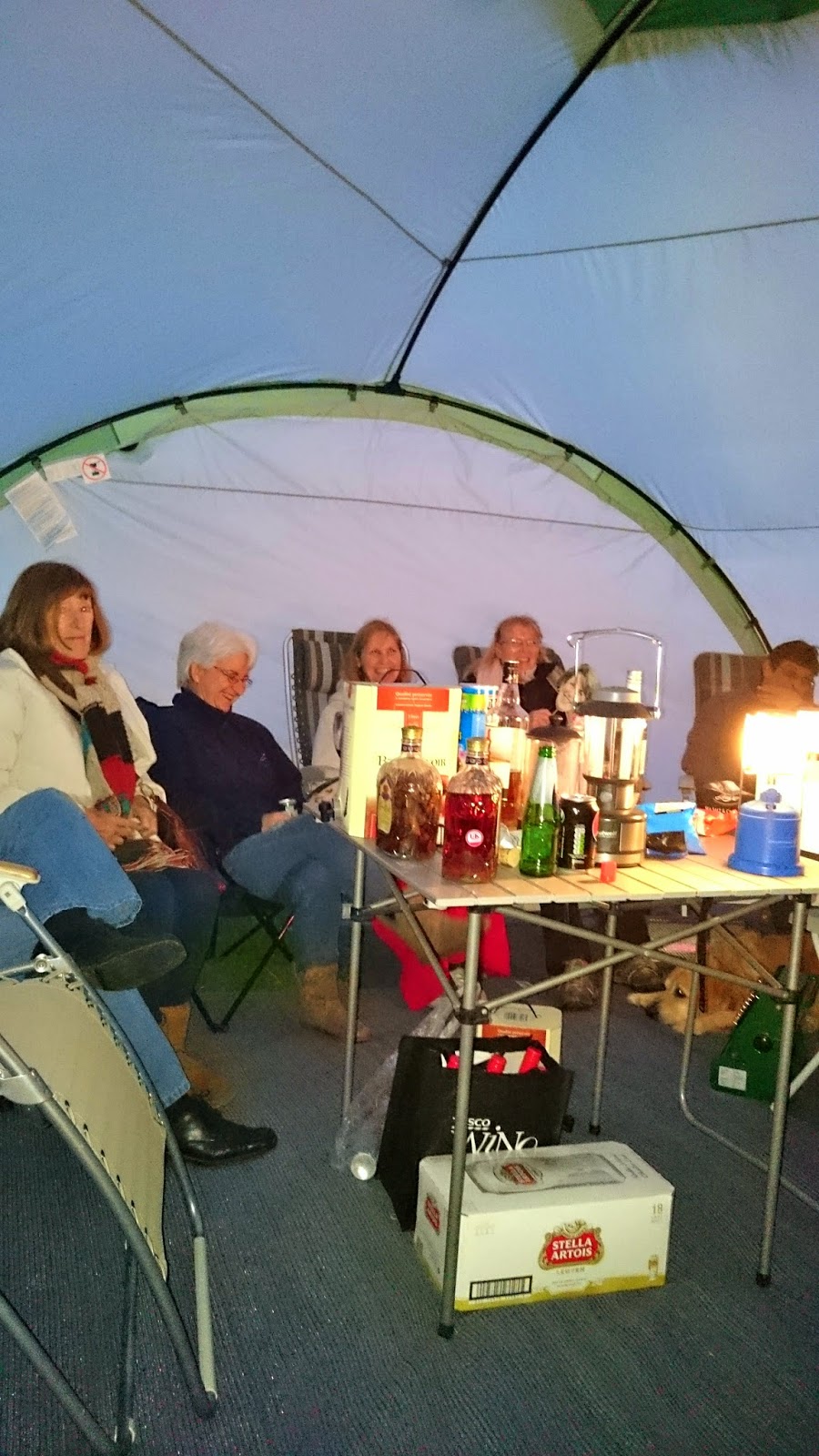 Saturday 18 April 2015
We slept well, although it was a chilly night.  We were awake early and enjoyed a brew with the heating keeping us very warm and toasty.  Breakfast was granola and we started to finally think that this was real - we had a campervan!  It was a sunny day, clear blue skies, but with a strong, cold wind.  Cathy christened the shower - lovely hot water! After breakfast we popped into the marquee for a catch up, before again heading out to look around the show.  We popped over to the Regal Furnishings stand as we're booked in for next week to have cab seats covered, plus cushions and curtains made.  Reading their pamphlet later, we realised we needed to pre-order the leather, so sould need to chat to them tomorrow.

The rest of the day was taken up with prepping food for the MMMMU BBQ.  This time I was cooking jerk pork loin with rice & peas.  I'd prepared the jerk marinade at home and the pork was left to soak it up for the day.  I was cooking this on the Cadac Safari gas BBQ, running off the external LPG point - another first in our new van! With it still blowing a hooley, we moved the van to provide more shelter, which allowed us to sit in the warm sun for a while with a glass of red wine.  By now I'd set up the flagpole, with the smiley windsock plus a Royal Navy battle ensign!   Cathy now wants an LED light to strap to the top!  With the pork cooking and the rice & peas on the hob, we had a chat with the gang.  The MMMMU official photo was taken outside Nido this year - a great honour!  As usual there was plenty of lovely food, including some potent Reesies' garlic and paprika sausages!  Tonight was much colder and we were all feeling it so, most people headed off to their vans quite early.  In our case we had some hot chocolate before turning in. 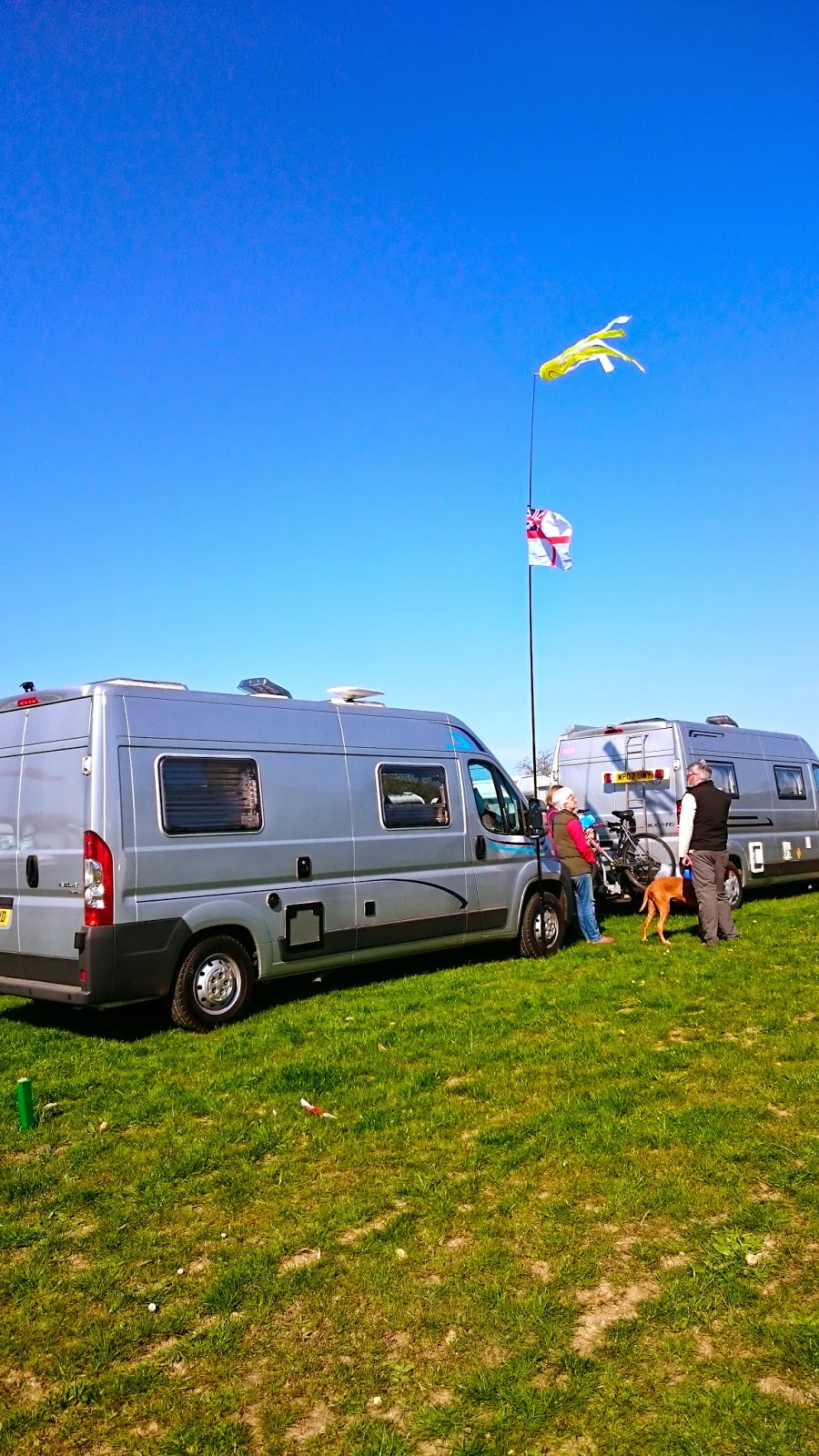 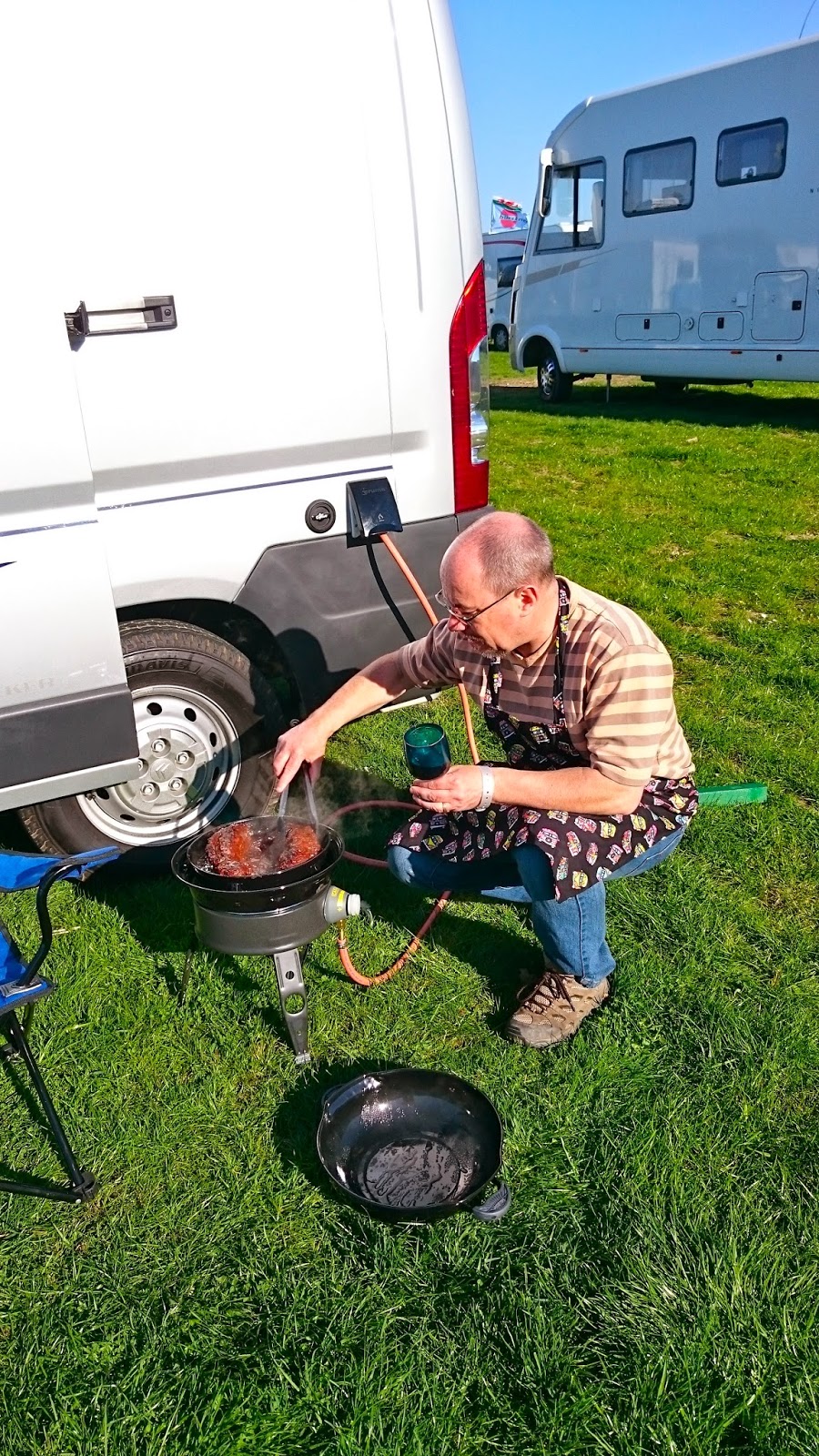 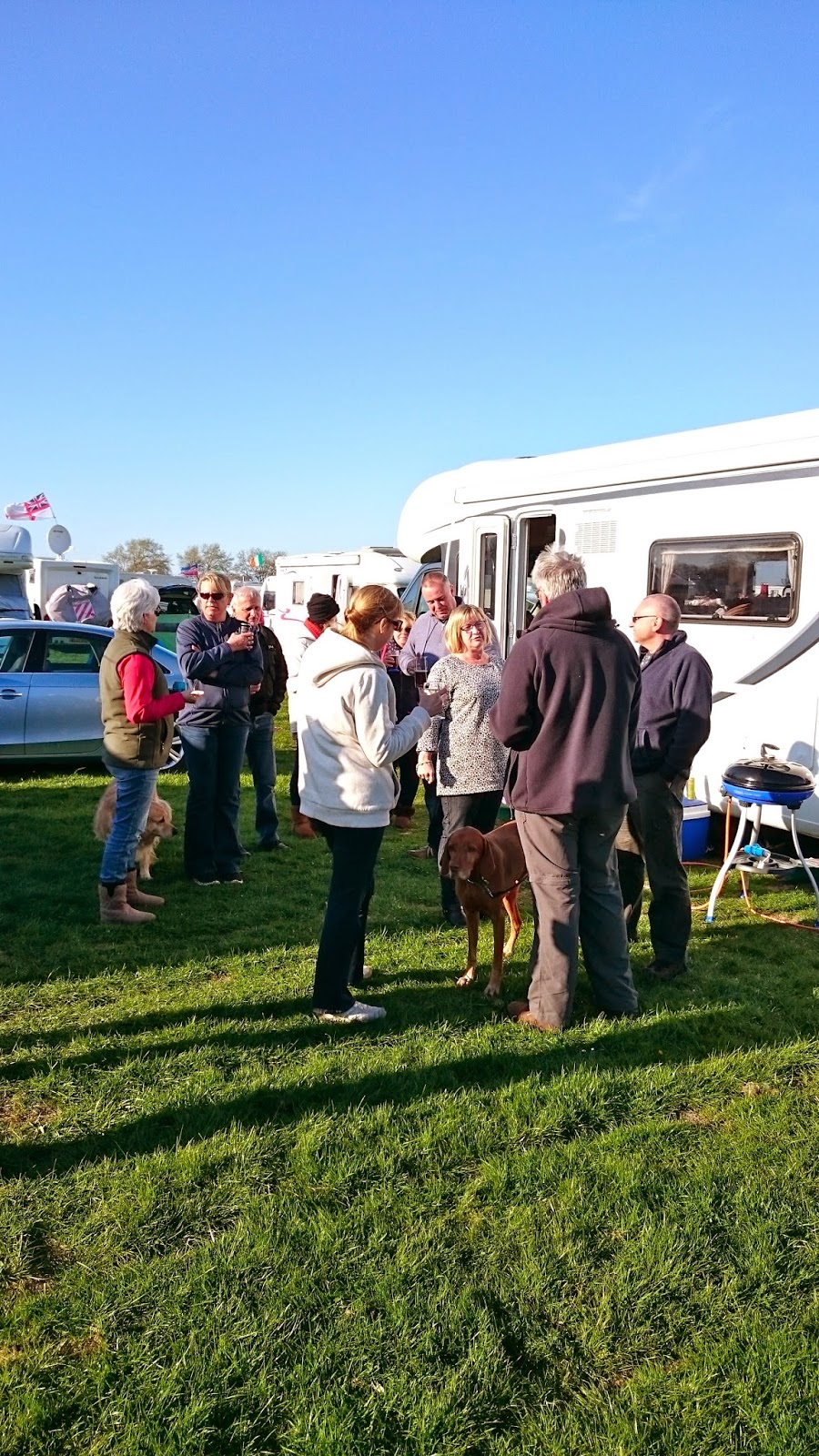 Sunday 19 April 2015
We kept the heating ticking over during the night, which kept us warm.  I had a shower this morning - hot water and a surprising amount of room in our small wet room.  It truly is just right for us.  Breakfast was bacon butties cooked on the Cadac outside and taken into the marquee to chat to everyone.  We stayed there for a while and I enjoyed some of the ground coffee brought by Julie & Bob.  Gary & Julie had to leave early so after their goodbyes we went over to sort out the leather with Regal and have a last look around the show, finding a few useful items.  We bought a couple of hot pasties and took them back to the van for lunch with a brew.  Then it was time to derig, secure for the journey home and say our goodbyes.  We'd again had a great time and were already planning to meet up at with the gang again at the Malvern show in August.  Waving as we left, we hit the road and decided to visit Mr T in Hemingford.  We parked outside his flat and I made a brew as we caught up with each other's news.  Then it was back on the road.  Back home, we unpacked and drove the van back to the storage site for the first time since last September.

We had a great weekend.  Finally having the van was hugely exciting and meeting up with friends made it all the better.  The only thing that would have improved it would have been Steph, Ian and Marmite joining us - maybe next time.  And so ended our first weekend away in El Nido - the first of many to come over the future years.