Nido’s parked in the aire in Cardaillac, another achingly pretty, medieval fortified village.  After a cloudy and chilly day, the sun appeared at about 1700 and it feels warm, although as the sun is starting to lower I can feel the coolness coming up from the stream running behind us.

Cathy’s been unwell for a couple of days.  A few nights ago she was bitten or stung by an insect whilst asleep. It got her right at the space between the top of her nose and her left eye.  She had an allergic reaction to this so, as well as the swelling, has had a very painful jaw and teeth and a constant headache.  She also had dizzy spells a few hours.  Anti-histamines and pain killers haven’t helped much, so she’s spent much of the last couple of days sleeping.  She did come out for our walk yesterday, but her face was too sore to wear glasses so she said she didn’t see much!  So today has been a day of rest with as little driving as possible, hence why I picked this spot in a sleepy village.

The bread van came to the aire this morning, so I was able to have some baguette and seville marmalade for breakfast; I bought a couple of croissants for Cathy but she slept through and wasn’t feeling up to eating or drinking anything.  We needed some groceries, so I drove to the Leclerc Hypermarket in Figeac.  I left C sleeping in the van.  I enjoy walking around foreign supermarkets, so took my time - I had a long list.  Cathy had asked for some soup and I also bought some iced lemon tea, to try and get some fluids back into her.  Unusually, I took a trolley around; I normally just get a basket with wheels. So I didn’t bother packing the groceries, just putting them back in the trolley and wheeling it to the van to unload by the side door.  With all put away I dialled in the co-ordinates for Cardaillac, just 13km away.

There was one van here when we arrived and it was thankfully quiet; several vans are now here for the evening.  I had some lunch while Cathy slept then when she woke up she was ready for her soup and some iced tea, then back to bed and sleep for her.  I took a walk around the village. It’s another lovely Beau Village, with lots of narrow cobbled alleys and half-timbered houses leading off the main street.  At the opposite end to the aire were the remaining medieval fortifications, mainly towers and gatehouses.  I wandered around for a bit, taking in the peace and quiet.  There’s an antiques (aka bric-a-brac!) shop on the mains street, as well as a restaurant and a shop/tabac.  There was also a boulangerie but I’m not sure if it’s still operating - it looked like the door and curtains had been closed for some time.  Many of the houses have retained their historical character. Some have been partly modernised, adding an extension or replacing a gable end with full glass windows.  I think this only adds to their beauty and it least people are investing in the village and living here; so many just fall into ruin as the last of the old inhabitants die out. Back at the van I had a brew and sat on the step in the sunshine, reading. A village dog wandered over and I gave him one of the treats we keep in the van. After that he escorted me to and from the bins and sat with me by the van step while I scratched behind his ears!  Cathy woke up later and sat in the cab for a brew - she’s now back in bed.  I hope she feels better tomorrow - she doesn’t do ill so if she’s suffering it must be quite bad.  So tonight will be another quiet one.  But it’s a pleasant place to stop over, with lots of birdsong.  There’s a couple of churches in the village. The one at the other end chimes the time but at about 1700 the one by us suddenly went crazy on the bells - really made me jump!  I think a couple of people were perhaps hanging off them!  It went on for about 10 minutes, then stopped and all’s been quiet since then.  There’s been a few lawnmowers and streamers going, but that’s normal this time of the year, although we do notice it more in the van.

Tomorrow, depending on how C’s feeling, we may drive over to visit Rocamadour, a town built on a cliff.  In any case, I’ll try to find us somewhere quiet in the countryside to stay over. 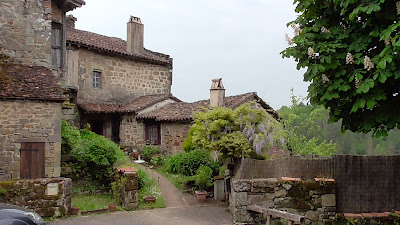 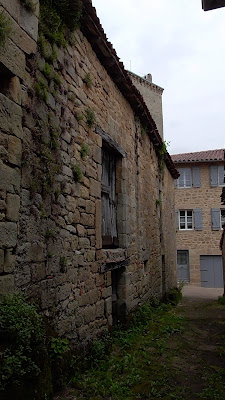 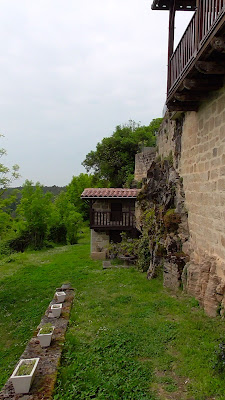 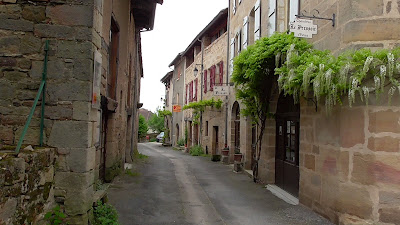