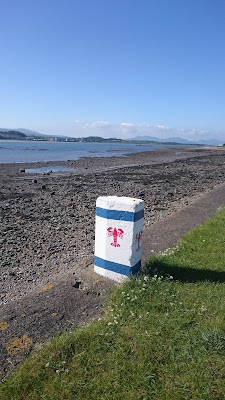 Friday 13 May 2016
I finished work at the normal time and we hit the road around 1730. Our destination was the Isle of Anglesey.  The traffic wasn't too bad and at about 1930 we arrived at our wild camping spot, a small car park right on the Menai Straits, facing east and overlooking Snowdon. Caernarfon and the castle was over the water to our right.  Another Motorhome was also parked up, plus a couple more just up the road. The tide was receding and as it did, flocked of sea birds arrived to peck over the recently sea-covered rocks and sand. Cathy warmed up our dinner and we sat in the cab seats enjoying the food and the view. After a full day at work, then a long drive, my eyes and ears started to adjust to the peace and quiet.  Although sunny there was a stiff northerly wind, which was quickly bringing down the temperature; the past week had been very warm but it was going to turn a lot cooler overnight and into tomorrow.  We wrapped up and took a walk along the shoreline. The remnants of a wooden and concrete pier were now exposed and we walked out on this. Large numbers of small mussels were available for gleaning, washed twice daily by the fierce tidal Straits - they would have made fine moules!  As we turned to walk back, the sun was setting over the fields at the back. We made some tea and sat watching the light fade over the mountains as the lights of Caernarfon twinkled across the water. There was still some light in the sky as we turned in for the night.

Saturday 14 May 2016
Our plan today is to visit a few of Anglesey's many beaches.  We've tended to visit the same places and had ignored the west coast, home to some of the best sandy beaches.  We slept well and woke to clear blue skies and sunshine, albeit still with a stiff, cool wind.  A cuppa and healthy breakfast of blueberries, pineapple, granola, dried fruit & nuts plus Greek yogurt set us up and once packed up we drove the 200m to the entrance of the Halen Môn sea salt place.  They make some of the best sea salt we've tasted.  We particularly like the plain white flakes and needed to top up.  We were there before opening time, so Cathy sat on the van bench in the sun, while I walked back to the road to take some photos.  We topped up with sea salt and also bought some crackers and pork scratchings to add to our lunch.  I set the satnag and we drove north along the coastal road to the small car park above Porth Trecastell, aka Cable Bay.  We parked alongside an old Adria Twin on a German number plate. The owners said hello and I helped them push their van back off the dune so he could tinker under the bonnet! We walked down the short dune to the beach, with soft sand at the bottom, sheltering us from the offshore wind.  A few families were already camped for the day, plus some surfing dudes in older 'selfie' van conversions, who were out on the water on stand up paddle boards; I'd like to try that one day. The tide was out and we walked down to the water's edge for a paddle - yes, it was mighty cold!  Cathy christened her litter grabber, filling a rubbish bag with mainly plastic. This is a nice beach although I suspect it's crowded in the summer.

On the way there we passed through Aberffraw, with a car park by the estuary and dunes, so we decided to backtrack and take a look.  Once parked up next to a large Motorhome, Cathy prepared lunch, then we crossed a small stone bridge to walk by the right side of the estuary, along the coastal path.  We  passed a few small coves - mainly sand/shingle with lots of rocks and half an hour later reached Porth Cwyfan, an expanse of sand, shingle and rocks.  It was a bit noisy with motorbikes racing around the Anglesey Circuit on the other side of the bay, but they occasionally stopped and peace returned. Within the bay is the small Cribinau Island, which can only be reached on foot at low tide and, sitting on top of this walled island was the equally small, white-washed church of St Cwyfan, which has stood there since the thirteenth century.  The church was locked but we took a nosy throug the small windows! Back on the beach we found a sheltered, sunny spot on the soft sand and enjoyed our lunch. We returned via a small lane, passing several lovely cottages, before reaching the car park.  It felt chilly in the strong northerly wind, much colder than the past few days, but the strong sunshine and blue skies compensated.

Our next stop was Porth Trwyn. I'd seen this on Google Maps but what interested me was a small campsite right next to the beach.  The approaching road was narrow with passing spaces and, although the beach looked lovely, there was nowhere to park.  But the small campsite with EHU looked interesting so I'll need to investigate that further.  I punched in the coordinates for Cemlyn Bay, which is quite close to the power station on the north of the island.  This is a stony shingle beach, not unlike Chesil Beach, including a similar brine lagoon cut off from the sea by the shingle bank. The parking was good and free and we took a short walk along the beach, before returning to the van, where Cathy had a snooze and I sat on the van bench with the side door open in full sun, but protected from the chilly wind - lovely.

And so on to our final destination today - Lligwy Bay.  We've stayed here a few times before. There's a large car park that belongs to the café owners.  They allow vans to pitch overnight for £10.  But the view from there is lovely and it's peaceful once all the day trippers have left. When we arrived there were already several campervans and motorhomes parked up. We found a spot on the front next to another van conversion. Our chairs and table were soon out and we sat in the sun with an apero and a snack. Cathy prepared the veg and lentils while I cooked a couple of pork chops, some green pepper and tomatoes on the BBQ, all enjoyed sat outside in the sun with a bottle of red wine.  Mind you, by the time we'd eaten it was starting to get chilly.  Cathy washed and dried up, while I packed everything away. She then shot off for a beach walk - I was wiser and stayed in the warm!  She soon returned shivering - shall I let her come in?  To be fair she made a cuppa on her return.  It's still a clear blue sky as the sun sets and the wind has completely dropped, but I think it'll be quite cold tonight. We're all warm and cozy in the van though. Early night to read then snore I think!

Sunday 15 May 2016
It was quite chilly in the night and I didn't sleep well with neck ache and the van on a bit of a wonk, so I eventually got up and made us a cuppa.  We had a short walk on the beach before breakfast. Cathy did some litter cleaning around the overflowing bins and got chatting to the café owner, who told her the council wanted to remove the bins - how mad is that? She repaid the favour by only charging us parking fees for the night and not today. We'd just finished clearing up when a lady popped over to say hello.  Her and her husband were in the Autosleeper PVC next to us and she was interested  in comparing notes, particularly as they'd only had their van one week.  It was a nice van with plenty of galley prep space and rear benches that make up into 2 singles or a double bed.  It seems their only compromise was storage space, so they're looking at ideas for maximising what space they have.  It was good to compare notes, especially about travelling in France.

We still had plenty of sunshine, although with a lot more high cloud today, and the annoyingly fresh breeze was still with us. So we took a jacket for our walk north along the coastal path towards Dulas.  We eventually came across another beach, so had a mooch around searching for sea glass and other 'treasure', before clambering over the rocky headland to walk back along the tide line.  The water felt warmer than yesterday, but it's all relative in mid-May!  Cathy made us a brew while I set up our chairs on the grass and we enjoyed our last hour of sunshine before packing up and driving home, for a couple of hours' van cleaning before I returned him to storage.

Although a short weekend, we made the most of the sunshine and beaches.  We found some new places to chill out and will soon be back to one of our favourite places. 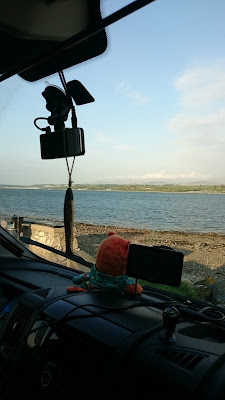 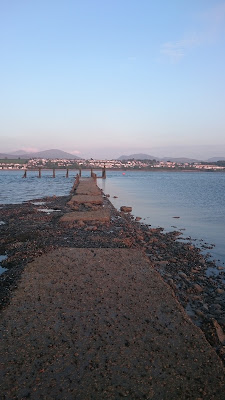 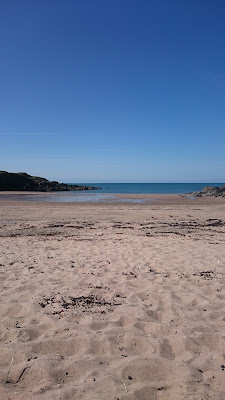 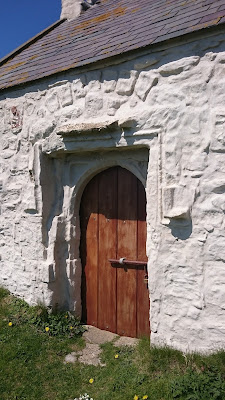