A great view in Scotland

Nido's parked up in the Upper Cheviot parking area just over the border in Scotland, with a fantastic view over the Cheviot hills.  This park up is one of many in a trial being run by Forestry and Lands Scotland.  They allow motorhomes and camper vans to park up overnight for one night only (no return within 24 hours).  Some of the parking areas charge but this one doesn't.  It's a great initiative so long as everyone follows the simple rules and details can be found on the Forestry and Lands website.

We left The Twice Brewed Inn yesterday and drove for about an hour to Kielder Water, the largest man-made lake in Europe.  On the way we stopped in Haltwhistle to do some food shopping in what must be the smallest Sainsburys in England! It was a beautiful, still, sunny day with clear blue skies.  The roads were extremely quiet and with the abundant greenery, trees and the blue lake, we could easily have been in France or Germany.  We parked up at the Tower Knowe visitor centre.  The first car park is by the toilets, shops and restaurant, but we took the left fork to the overflow car park, which only had one other van parked.  It's £5 for the day and the ticket is valid in all of the official car parks around the lake.  Cathy made a picnic and we followed the path along the lake, soon finding a route to the water side, where we sat on some stones to enjoy our food and allow Salty to cool off in the water.  Swimming is banned, which is a shame as it looked quite safe; if it was France there would be a dedicated 'beach' area for swimming, separated off from any water traffic.  We continued along the main path around the lake, before turning off down a side track to again reach the lake, passing some sad looking, abandoned chalets that I think were part of the Outdoor Education Centre.  The main path is also used by cyclists and sometimes runs alongside the road that follows the lake perimeter, so at times we lost complete sight of the lake, which was a shame.

We moved on to our overnight stop, which was a CL at Haining Head Farm, near Bellingham. It's a working farm and there were sheep, lots of birds (including noisy guinea fowl and pea hens!) and a few wild children living on the farm!  It had good views over the hills and some passing traffic on the road, which reduced into the evening.  There were two caravans on site and I think the owners were either shepherds or sheep shearers, as they had their working dogs with them and were away during the day, returning later in their work clothes.  We had a quiet evening and ate outside in the warm sunshine. 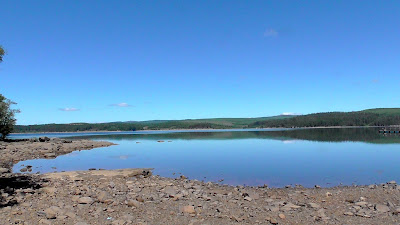 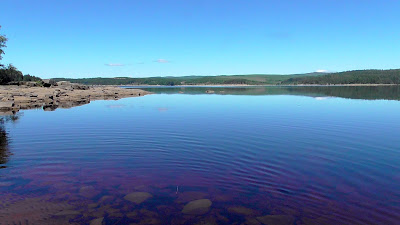 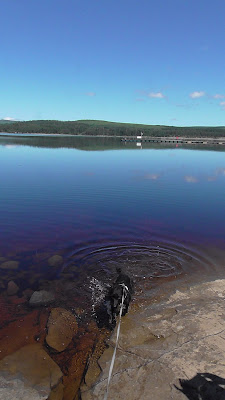 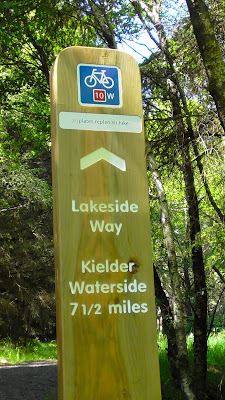 Heading over the border into Scotland this morning, we first stopped at Hell's Hole, Wauchope Forest.  This is another of the free Forestry and Land stopovers.  We parked up in the shade and had a cup of tea, before taking Salty for a walk around the forest trail, which included a cooling swim in a stream for him.  A short distance away we turned off and drove up a steep and winding track to reach this current stopover.  The drive up was relatively easy for us in a 6m campervan, but anything too long might struggle with the hairpin bends.  But the views up here are amazing and its very quiet and peaceful.  When we parked up I could see a Forestry and Land van parked up and later the Warden came over to have a chat.  He was very helpful and welcoming, explaining all about the trial to allow motorhomes to park in their car parks and how the Scottish Government were encouraging such schemes.  He gently explained the simple rules (no fires, no litter etc), then wished us a pleasant stay.  This is an excellent scheme and we felt very welcome.  I hope the trial becomes a permanent feature and we can return to use many of the others around Scotland.

We had lunch on arrival here, so supper was 'tapa' of potatas bravas and sausage, with a San Miguel.  Well, when in Scotland....eat Spanish!  The views and peaceful quiet here are amazing and I highly recommend anyone to try them out and send them a positive review if you enjoyed it (QR code on their sign on each site). 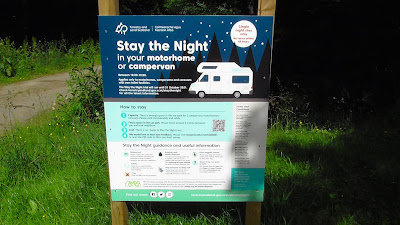 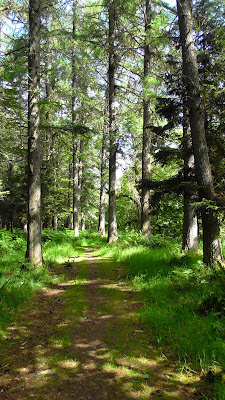 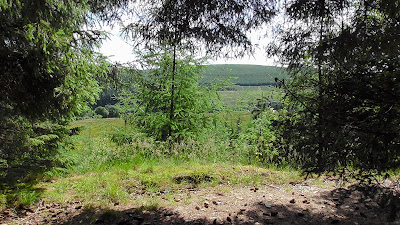 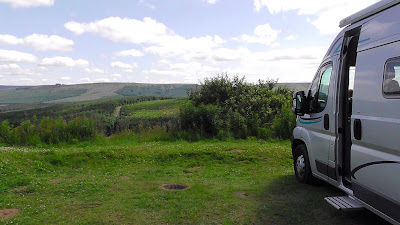 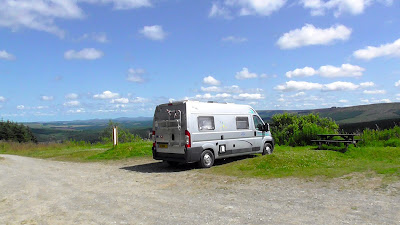 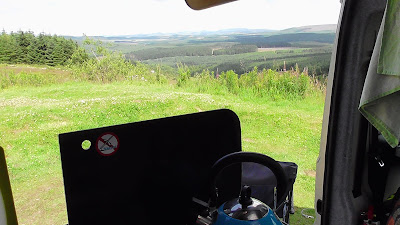