Thursday 1 June 2017
We're sat in a large field of grasses and wild flowers, surrounded by dry-stone walls and with far-reaching views over the hills.  This is a temporary holiday site (THS), run by the Camping and Caravanning Club.  These are set up all over the country at different times of the year and are great value for money; in this case £5.75 per night, with fresh water, rubbish disposal and somewhere to empty the loo. There are social events organised if you want them, but absolutely no pressure to join in. This THS is just outside the village of Shap, a few miles from the M6 in Cumbria.

Van packed, we had an easy drive up, arriving about midday.  We parked in a corner, facing the views and walked down to Shap Abbey, in the valley below. The Abbey has been around since the 12th Century, with later additions up until the 1600s. It still has atmosphere and it was easy to imagine the monastic life of the canons who lived there.  The rest of the afternoon we spent sat outside reading and relaxing.  Some RAF typhoons broke the silence occasionally but, once they'd returned to base, peace and quiet descended.  We heard the curlews before we saw them, then a pair flew across, returning 10 minutes later to roost - a rare sight. Dinner eaten with the van door open (and thanks Graham for the lovely soda bread leaving gift!) we enjoyed the peace and quiet of this lovely spot - not a bad way to spend our first day of full-time retirement. 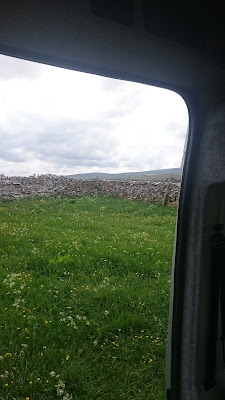 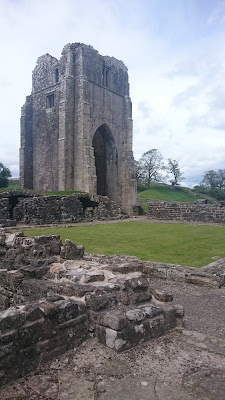 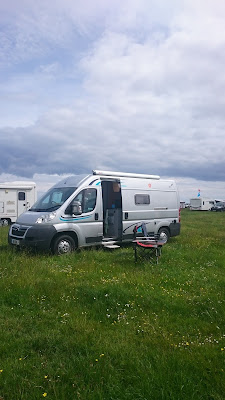 Friday 2 June 2017
This retirement lark is bad for the memory - I was already struggling to work out what day it is! It rained quite hard in the night and I was a little concerned about reversing off the grass pitch, but all was well. We stopped off at a supermarket in Penrith before driving across some serious hills and up the A1.

Nido's sat in another field of grasses and wild flowers; another C&CC THS, this time in Beadnell Bay, Northumberland. It's right next to their main site but about a 3rd of the price. Again we were warmly welcomed on arrival, given a run down of the local amenities (mainly pubs!) and invited to park up wherever we liked. I'm a convert to these pop up campsites where we can just turn up and pay a few pounds. In this case  we were just over the road from the beach so, after a quick brew sat outside in the sunshine, we walked along the beach towards Beadnell; the tide was out with some interesting rocks exposed. There were good sea glass pickings and Cathy soon had full pockets, both jacket and rucksack! We walked past the old harbour and along the sandy bay, enjoying a refreshing paddle in the North Sea, before stopping off by the harbour lime kilns to sit in the warm sunshine.

The air cooled considerably on our return trip and the warmth of the van was welcome. Dinner was lamb chops with a Greek salad. After washing up, a read and a snooze, the clouds disappeared and we sat in the warm van watching a lovely sunset, with light in the sky way past 10pm. We're here for a couple of nights so tomorrow we'll walk north along the beach to Seahouses where, just over 5 years ago, we enjoyed fish and chips sat on a wall by the beach. I wonder if they'll be as good this time? 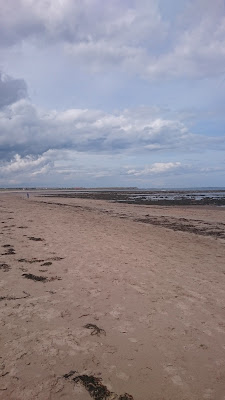 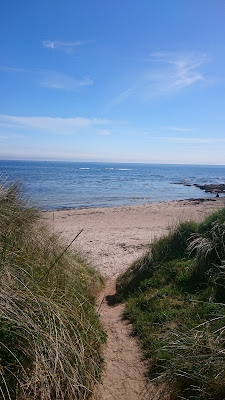 Saturday 3 June 2017
It was warm enough to cook and eat breakfast outside this morning. With another night here we didn't need to rush. We walked across the road and along the beach towards Seahouses, having a paddle along the way. The footpath took us across the golf course and we had a wander around a busy Seahouses, not surprising given it's a half-term weekend. We bought a few groceries and walked back along the road to the van. By now a sea mist had come in but, weirdly, despite this, it was hotter. Normally it's the opposite but it was like the mist was magnifying the sun's rays. Back on the beach, we had a wander along, watching the seabirds and collecting more sea glass before returning to the campsite. By now it had started to rain a little but we chanced it to walk back into Seahouses for fish and chips; it rained very heavily on the way there. And we're they as good as last time? I'd say they were better; this time we bought them from Pinnacles, the fish & chip restaurant visited by the Hairy Bikers on one of their UK tours. Later the sky cleared and we enjoyed sitting outside in the evening sun, reading and chilling.  We're both shattered after a day of walking so an early night, then off to Bamburgh tomorrow.

I spotted a housesit in Cornwall in the daily email listing; an old farmhouse with veg gardens and a couple of lovely dogs to look after, a Patterdale and a Jack Russell. I contacted the owner, who quickly replied and we're now set up for a 10 day sit in Cornwall in July. We'll take the van so we can have an extended journey there and back, plus add on a few days if we want to.  It's close to Eden and Heligan, two of our favourite places, so this is a great way to revisit them. Retirement's turning out to be very busy!

Sunday 4 June 2017
Morning saw us reluctantly leave the THS at Beadnell. They really are great VFM and our current campsite at £20 per night emphasised the point, some £12 more than the THS, with the only extra being electricity. So we're charging 'all the things' but even we can't use £12 of electricity in one night!

We drove north, through Seahouses and out the other side, pulling over soon after alongside the road and opposite St Aidan's Dunes. A sandy stomp over the dunes and it was sandals off and in for a quick, refreshing paddle. There were a few more people (and their dogs) out today, enjoying the warm sunshine when it appeared from behind the scurrying clouds; it definitely felt fresher today. After a couple of miles Bamburgh castle came into view. As we walked across the dunes towards the road in order to find the loos, the heavens opened and we were soon wet through. Once the storm was through we bought a couple of 'Northumberland Pasties' to scoff on the walk back to the van. By the time we returned we'd dried off, although Cathy was complaining of a wet dog smell (and it wasn't me!). A quick check of the map showed our next campsite only a mile away, inland at Westfield Paddock Caravan Site, an adult only site comprising 10 pitches. There were only 3 caravans and one Motorhome here so we picked a nice pitch, but then saw we'd been 'allocated' pitch 8, so reluctantly moved.  It's a quiet site away from the main road, but with plenty of birdlife (including some enthusiastic cockerels!) and sheep in the adjacent field. It was a bit too chilly to sit out so the rest of the day was spent snoozing, reading and eating dinner.  The forecast for the next couple of days doesn't look great, so we'll see how it goes. One thing we've learned in this part of the world is if you don't like the weather, hang around for half an hour as it'll soon change!


Monday 5 June 2017
Regular readers will remember us staying on a campsite in Norfolk known as Stalag 19. Well, we're now at staying at Stalag 20!  I'd say this one is more like a Russian Gulag - multiple signs telling us we cannot do.  Toilets and showers out of the 1950s, everything painted in totalitarian dark green.  I'd booked a pitch without electricity - £18 - but then found that we have to pay another 10p to use the shower.  10p! - what is the point? It must cost more to install and empty the 10p machines than it does to just suck it up in the price. There were a few more inmates pitched around. We didn't see them - perhaps they're only allowed out during roll call in the morning.  It's difficult to judge campsites unless visited before; in this case it was some research and reviews and they were, in the main, quite positive.  I can only suggest we have different 'tastes' to other inmates campers.

We woke to a breezy grey day (no sirens or searchlights during the night so clearly they'd been no escapes) and moved on down the road to a car park at Low Newton on Sea. Despite the wind and rain, we walked down toward the large sandy beach.  At the bottom we came across a horseshoe of cottages and, in the top right-hand corner, saw the Ship Inn.  We'd seen no signs for it on the way down, so wasn't sure if it was still a functioning pub, but a quick Google search shows that it is. It even has it's own micro-brewery on site. It was morning so we didn't get the chance to go in, but it looks well worth a visit.  We walked along the quiet, sandy beach with Dunstanburgh Castle in the distance. It was Monday morning - normally a busy motorway commuting day - and we enjoyed the solitude, with a sharp wind and occasional showers, with the waves pounding on the beach. 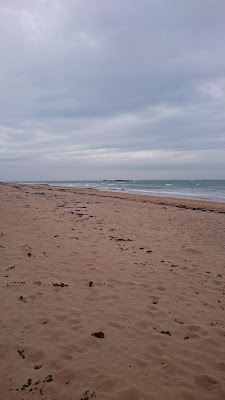 After checking in at Stalag 20, we walked down to the village of Craster.  We'd been here on our first motorhome trip, buying some great produce from Robson & Sons, the smokehouse near the harbour.  We bought some bread from the local cafe, then enjoyed an excellent crab sandwich and a pint at the Jolly Fisherman pub, with views out to sea.  Back at the van, we spent the rest of the day reading as the rain pounded on the roof.

Tuesday 6 June 2017
It rained long and hard all night and the forecast was for more, so we decided to cut our trip short by a day.  It meant we missed a visit to Vindolanda, but we'll return in the future.  The journey home in rain and strong winds was interesting, but we have another day to prepare for our housesit on Anglesey in a couple of days' time.