First swim of the year

Friday 27 May 2016
I'd booked this CL at Pwllgoed, just outside the village of Tudweiliog, a few weeks ago.  It's a lovely spot, about a mile outside the village down a single track road.  It's on a working farm - sheep and cows - and is very quiet and peaceful. From the site we had views of both the sea and the hills in the distance, with animals in the adjacent fields. After a meal we walked back down the lane towards the village.  The hedgerows and verges were green and full of life and a warm sunset relaxed us after our drive from home.  Back in the van, we had a cuppa before crashing out early to read.  My ears were ringing in the silence and we were both soon asleep.

Saturday 28 May 2016
We slept well; Cathy woke earlier and had a read, but I slept through until 0900! Breakfast was fruit and yoghurt and Cathy prepped our packed lunch.  I'd sorted out a walk before hand, that would take us along the coastal path and back down a small lane. We stopped off at the village shop to buy some water (as I forgot to put ours in the rucksacks) then walked past a caravan park, down to the beach at Porth Towyn. Here we joined the path and headed south west with the sea on our right. The sun was shining and the air warm, promising a good day.  There were several small coves and beaches on the walk and not far along we came across some old shacks at what must have been a fishermen's cove, complete with a small cottage on the headland, built into the hillside.  Just after this we reached a lovely, calm cove with a small car park above. It's a popular spot for dive boats to launch and one was already in the water, waiting for its passengers.  Some people were taking a swim - no doubt chilly from their screams! The water was very clear with the sand and seaweed covered rocks very easy to spot.  We continued to walk in the warm sunshine, past more coves and small caravan parks.  This part of the coast really is a well kept secret, a hidden gem of unspoilt countryside and beaches, teeming with flowers, wildlife and seabirds. Eventually we reached Traeth Pennlech and dropped down to the beach for our lunch stop. The sand flies were a pain, so we ended up eating our butties while paddling in the sea, which our feet really welcomed. Back on the coastal path, we stopped again at Porth Colmon for a brew, sat on a bench overlooking the sea. Our return journey was along a narrow lane, lined with hedgerows. We passed some lovely old cottages, with great views and plenty of room for Nido! It was a sun-trap and we were both flagging by the time we turned off the road by the White Lion Inn, to return to the van.  After a cuppa, I prepared dinner while Cathy had a shower. We cooked and ate outside, before moving into the van to read, occasionally checking the sun's progress as it slowly dipped down, throwing a golden light on the distant sea and reflecting off the side of Nido. With no wind, the birds singing and feeling warm from the sun and food, I have no doubt we'll sleep well again tonight.

Sunday 29 May 2016
I'd set my alarm for 0730 as I wanted to get out for a bike ride before too much traffic was on the road. It was warm already and after breakfast, kitted up and ready, I unhooked the bike from the rack and turned left out of the campsite. Not far along I had to stop a couple of times to adjust the gears - where's my wingman when I need him!?  Before I left I'd scribbled a rough route on some paper and the early part of the ride was spot on.  However it was only rough and about half an hour in I took the wrong route, turning left instead of right.  I carried on for a while, aiming to reach the sea and follow the coastal road.  Eventually I saw loads of tents on my left and what looked like a long, sandy beach - not one I recognised, so I knew I was on a bit of an adventure! Starting to climb around the steep hill, I saw a car park on my left, so pulled over to take a look at the information board.  I was by a National Trust property at the western end of Hell's Mouth, a well known surfing beach between Aberdaron and Abersoch - how the hell did I end up here!?  Now I had my bearings I knew I could follow the road to Aberdaron, then pick up the coastal route.  Turning left out of the NT car park, the road climbed up and up and up.  Down into the granny gear I managed to get about 100m before the road turned and kicked up again, only steeper.  That was me done; I had to stop a couple of times for a breather, some water and a puff on my asthma inhaler! The road seemed to climb forever but eventually I topped out, riding along the narrow lane before starting the steep descent into a very busy Aberdaron.  We all know what goes down must go up (again), only this time it was a bit more manageable and I was able to stay clipped in.   The narrow lanes were great for cycling - smooth and no potholes, but they were quite busy with bank holiday beach seekers.  I knew there was a café at Porthor - aka Whistling Sands beach.  I turned in and walked down with all the beach goers. I had to cross some of the soft white sand in my cycling shoes to get to the café, but was soon recovering sat outside with a latte and a twix,overlooking the beach.  We came to this beach about this time last year on Cathy's birthday, an equally warm and sunny day. Back on the road, I soon reached Morfa and was cycling along the lane we walked yesterday, before returning to the main road into Tudweiliog and back to the campsite.  A great ride although twice as long as I planned!

Cathy had been busy, having a good clean and re-organise of the van, plus she'd prepared lunch. After  sorting out my bike gear, we loaded up our rucksacks and walked back down the lane to the village, taking the footpath alongside the pub and across a couple of fields, to a track taking us back to a lovely beach we found yesterday.  It was quite busy and the only way to reach the small, sandy cove was to wade through the sea.  It was a hot sun-trap, but a little spoiled by some noisy jet-skis and powerboats.  We dumped our gear and slowly entered the water for our first sea swim of the year.  It was cold but not unbearable and we were soon swimming out, with rocks and cliffs either side of us.  We swam around to a small inlet, where we sat on the warm rocks and in the shallows before braving the colder water to return to our picnic blanket and towels.  We enjoyed our lunch sat in the warm sunshine. We went for another swim later - it felt a lot colder the second time around! Unfortunately those around us were still noisy and the men had gone off to fetch beer, so it wasn't going to become peaceful any time soon.  We packed up and reversed our route back to the van. Unpacked and washed up, we had a cuppa outside, before I enjoyed a hot shower.  The breeze was a bit cooler this evening, so we sat in the van with a G&T and some snacks.  It was another lovely sunset and there was still some light until about 2200.  It's been a really relaxing day - plenty of exercise and sunshine, so we'll sleep well again.  Tomorrow we head for home but we'll make the most of the day, starting with a lovely cooked breakfast, enjoyed outside in the sunshine hopefully.

Monday 30 May 2016
We woke with the sun and were up and sat outside in the warm sunshine with a cuppa by 0800.  It promised to be another hot, sunny day, but unfortunately we had to return home.  I cooked us a breakfast outside and after doing our inside and outside tasks, we left the site to visit the National Trust property - Plas yn Rhiw - at the far end of Hell's Mouth beach, the one I came across on my bike ride yesterday.  The satnag took us down some interestingly narrow lanes but we eventually pulled into the car park at about 1100, to find the house and garden don't open until midday!  So instead we turned right and walked down, past a basic campsite, to take a land-slipped footpath down to the beach.  The tide was out so we enjoyed a bare foot walk along the surf line.  The beach is long but only accessible from each end and only at low tide.  With high, crumbly cliffs, it had clearly suffered some storm erosion and there wasn't much sea glass for Cathy to pick up, so we didn't stay long! Instead we picked up the main road heading to the north coast to look for a lunch stop. One beach had a "campervans not wanted here" sign, so we moved on and ended up at a large car park right by the beach at Dinas Dinlle, not far from Caernarfon airport.  We took our lunch and chairs down to the beach and chilled out for an hour - a nice break in our journey. Then it was back on the road and home to unpack before I took Nido back to his storage place.

The weather was outstanding all weekend and, on returning home, we realised we'd had it a good deal better than some places, particularly the east and mainland Europe - flash floods in the Black Forest so we hope that's finished before we visit in July!  We'll definitely be back to the Llyn Peninsular soon; it's so beautifully unspoilt with quiet lanes, great walks and remote coves perfect for swimming. 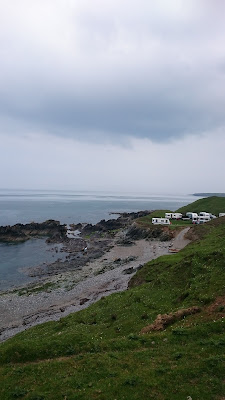 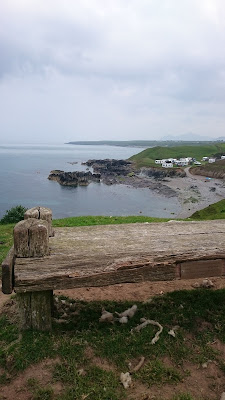 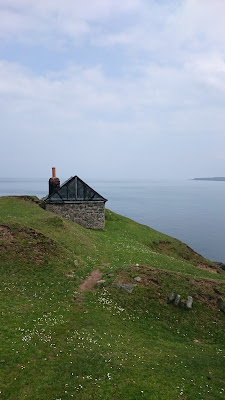 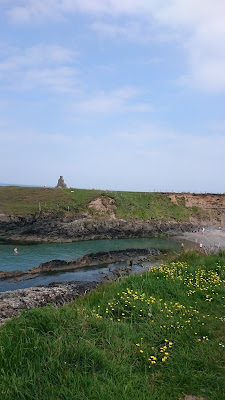 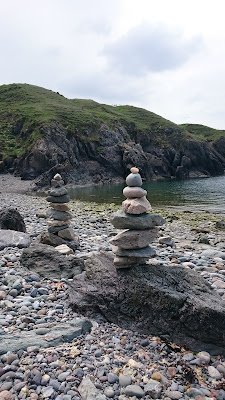 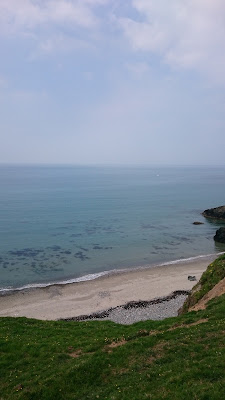 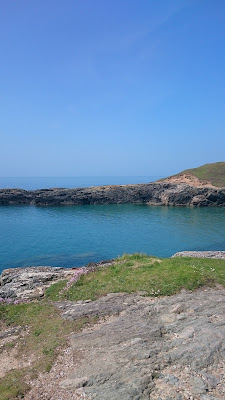 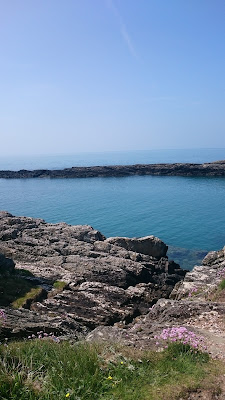 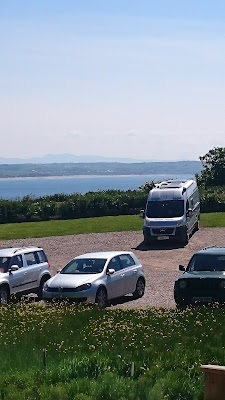 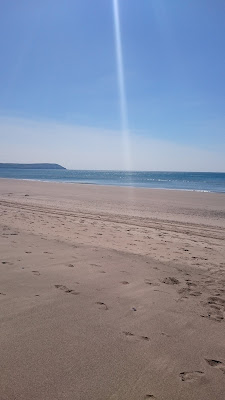