Friday 11 March 2016
It's been well over two months since we spent New Year in Wales in Nido.  It's felt like a really long winter and we were more than ready for a trip away in the van.  So this weekend has been a long time coming.  I booked the CL at the Patterdale Hall Estate last week; five pitches in a quiet area of the Lake District near Ullswater.

I finished work at midday and at home Cathy had already packed up her car, so we we quickly turned around to drive up to the storage site.  It was a dry and sunny afternoon, so loading up was easy, although the water had been switched off, which prevented me filling up the tank.  So I drove back home to top up, while Cathy unpacked on the drive.  At the end of our New Year trip I emptied all the tanks, including then boiler, so all of these also had to be primed and cleared of air in the pipes.

We were soon on the road, heading north up the M6.  The traffic was kind to us and we followed the directions in the Caravan Club book, ignoring the satnag.  This was just as well as Cumbria was still recovering from the dreadful floods just before Christmas and many of the roads were still down.  We followed the diversions, gradually chilling out as we drove, with snow-capped hills all around us.  We passed through Glenridding, which was hit particularly badly in the floods; I remember seeing the village on the TV news at the time. Just outside the village we turned off opposite the Patterdale Hall Estate.  The CL is set amongst trees, all hardstanding with electric hook up and a picnic table alongside each pitch.  Two vans were already on site and we pulled into a free pitch, overlooking the beck - it's a very peaceful spot. I sorted out the electrics and the insulated silverscreens across the windscreen, while Cathy made up the bed and finished the last of the unpacking.

Finally we sat inside with a brew, sharing an Aldi 'twix', listening to the beck and the birdsong - lovely!  We fancied a leg stretch so took the short walk into Patterdale, passing the church and hotel before coming upon the White Lion Inn - result!  It's a cosy village pub and we sat in the warm, me with a pint of White Lion Pale Ale and Cathy with half a Heineken.  A couple of people were inside waiting for food and when it came out the portions were generous - I think that's us sorted for tomorrow night!

Back at the van, we sat in the cab seats chatting with a glass of wine and some nibbles, while a bacon and gruyere quiche warmed through in Oska, enjoyed with a green leaf salad. Washed up, we enjoyed a brew and a chat before giving in to tired eyes after a long day. With the sound of the beck outside and not much else, I'll think we'll sleep well tonight. We're looking forward to a day of hill-walking tomorrow.

Saturday 12 March 2016
Despite the peace and quiet, we both had a bit of a restless night.  I remember being awake at about 0330, listening to the resident owl.  Cathy was also awake, so we took the opportunity for a loo visit! Although it's next to our bed, it means one of us has to clamber over the other to get out - not easy at our age - so if we're both awake we can synchronise!

We were both awake by about 0730 and I got up to flick on the heating, then dressed and went off to ditch the gash.  Breakfast was cooked outside on Oska - egg and bacon 'jack-muffins' - like McMuffins but cooked by an ex-matelot rather than Ronald McDonald! In the meantime Cathy prepared our packed lunch.  All washed up, we packed rucksacks, donned walking boots and coats, locked up and turned left onto the main road towards Glenridding.

This was a short 10 minute walk and as we approached the village it was clear how devastating the December floods had been.  The sides of the beck were being rebuilt and some of the hotels, pubs, businesses and homes were still deep in renovation - it must have been dreadful for all those affected.  The footpath we had planned to use had also been washed away in the floods, so we followed the detour and were soon walking around the hillside, with Glenridding Beck down to our right.  As we contoured around the hill, the snow-capped summits of surrounding hills and mountains came into view, particularly Catstye Cam, which was covered in snow, with the summit lost in low cloud and fog. Although our walk offered a climb to the peak, it was clear we wouldn't be up there today.

We continued to follow the beck, before starting the ascent up towards Red Tarn, with Helvellyn in the distance. The local mountain rescue teams were out, practising with their very enthusiastic search dogs, who clearly enjoyed finding the 'casualties' hiding in the nooks and crevices, in exchange for a play with their ball in reward.  We continued to climb. The clear track now had some snow patches around and we soon reached the snow line. By now it was cold, windy and the visibility was increasingly reducing.  At the point we started to walk on snow, vis was down to about 50 metres.  Although we were wearing walking boots, they weren't all season, plus we didn't have our walking poles.  With visibility reducing fast and wind increasing, plus this being an unfamiliar walk, we took the sensible decision to stop climbing just before we reached Red Tarn and return the way we had come. Dropping back down to the beck, we found a spot by the river to enjoy our lunch - the hot tea was very welcome.  Back in Glenridding village, we bought some naan for our curry. Originally, we'd planned to eat out tonight after a tough walk. Even though we still walked as far despite turning back, we felt we hadn't achieved our aim, so decided to cook in the van instead.

Back at Nido, Cathy made a brew while I unpacked the rucksacks and put away our boots. We both had a welcome shower before Cathy had a stretch and read on the bed.  I prepared dinner, using a curry mix Nicola and Chris bought me last year for my birthday. This Rogan Josh mix was called 'The Spice Tailor' by Anjum Anand. We have her curry recipe book at home and it's excellent.  This mix has whole dried spices plus two sachets of sauce.  I used chicken breast, bulked out with onions, garlic, ginger, green pepper, mushrooms and broccoli - all cooked in Oska, with the naan wrapped in foil and warmed on top. During the prep, while hunting out some cumin seeds to add, I discovered fluid in the bottom of our spices box.  It had come from the Halen Môn salt we bought last year. Unfortunately this is packed in cardboard tubes with a plastic lid - if you remember the old smarties tubes you'll know what I mean.  Over the cold winter break the damp had soaked through the cardboard and the salt was damp. Hopefully we can dry it out and save it.

Full of curry and warmed up, washing up done and blinds closed, we enjoyed the cosiness of the van, finishing off some wine, followed by a brew and some chocolate cornflakes. Tomorrow we plan to visit a part of the coast near Morecambe, as we head south towards home.  In the meantime we're sat in our warm oasis, enjoying the peace and quiet, ready for the owl's nightly visit.

Sunday 13 March 2016
We both slept well and woke quite early to birdsong and another dry morning.  After breakfast we got in with our respective jobs - Cathy inside and me out - and by 0945 were on the road, heading south through the Lakes, past Windermere and towards our next stop.

Our National Trust book showed a historic site in the village of Heysham, by the beach.  We parked in the large village car park and walked down a small lane lined with old fishermen's cottages to walk for a short while along the coast, before turning back and past the church to the ruins of St Patrick's Chapel.  The ruin dates from the 8th or 9th century are and is built of sandstone. Near the chapel is a group of six graves cut into the solid rock.  The sun was starting to break through and with no wind and a very calm sea, it was turning into a lovely warm day. We walked down to a small beach and, because the weather was so nice, went back to the van to make some tea and pack a picnic, before heading back to a small rocky area with a stretch of dry, soft sand.  A few guys were fishing - and catching - gradually moving back off the rocks as the tide returned.  We enjoyed our food sat in the warm sunshine and had a mooch around the small beach.  Cathy found a few pieces of sea glass - pieces of clear and coloured glass that had been weathered smooth in the sea.  Once we saw one piece we saw them everywhere.

This beach stop-off finished off a relaxing weekend. Yesterday we had our boots in the snow and today they were in the sand!  Our next trip is to Camarthen over the Easter weekend, when we'll be house-sitting for a family, looking after their home, smallholding and pets. 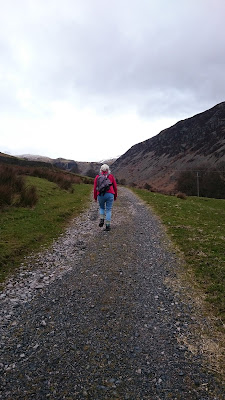 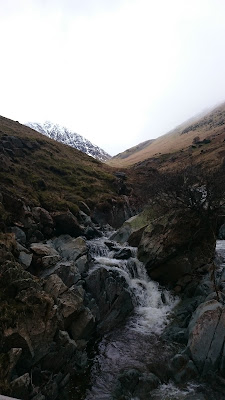 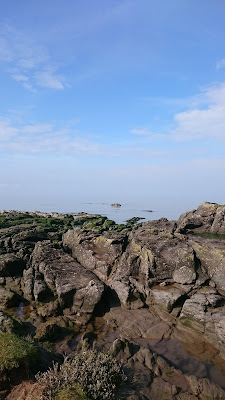