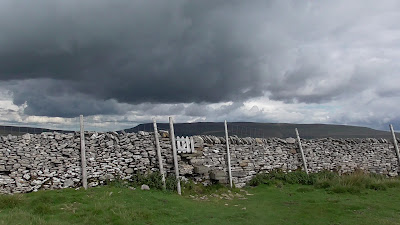 We were in bed by 2100 last night and didn't wake up until 0920 this morning!  We breakfasted outside, then made a packed lunch and flask, packed our rucksacks and walked back towards Muker.

We again passed thorough the meadows for the start of a 6 mile circular walk to Keld, crossing the river Swale via Rampsholme bridge, this time turning left and following the river along a wild stone track.  We stopped at the waterfalls at Swinner Gill, with the old lead mining ruins, for Cathy to have a quick paddle and cool off; it would be a great spot for a wild swim. We carried on up the track, climbing all the time.  I saw that Crackpot Hall was just off the route, so we detoured off to take a look.  The remains of the Halł had a fantastic view down the valley towards Muker.  There were still remains of the iron range in the kitchen and even the skeleton of the old tin bath!  Apparently the daughter was known as a real wild child, not surprising looking at the surroundings. It must have been a lovely home in its time, but now sadly falling into ruin.  We stopped on the hill above the Hall for a lunch with a view, before carrying on until we reached the junction of the Pennine Way, dropping down to the river and another large and beautiful waterfall.  Crossing the river again, we climbed up to the small hamlet of Keld, where Cathy treated me to an ice cream.  Walking out we found Ruskin's campsite, a lovely small and quiet basic site - one to remember for the future.  Heading out we turned left near the hotel/pub and shortly turned off to walk up the corpse road.  In the past the dead in wicker coffins were carried along this route, over the hills, to the church at Grinton, near Reeth - it took them two days!  Imagine being sat in the pub and someone comes in to tell you 'old Fred' has died - time to sup up and get your walking boots on!   The corpse road took us on a long steady climb up Kisdon Hill, where we stopped at the top overlooking Muker for a brew and flapjack.  After a jelly-leg descent, we were back in the village and a short walk to the campsite.  Rucksacks unpacked, hot water heater on, boots off and a cold beer in hand, it was time to chill out before showers and walking back the Farmer's Arms for tonight's dinner.

The pub was very busy and it looked unlikely we'd find a table, but as we walked in and I ordered our drinks, a group left so Cathy piled in!  Food ordered, we had a flick through the local magazine - lots going on in this close-knit community.  We were asked if we'd mind sharing our table with a group of four - fine by us - two couples staying on the same campsite.  Our food took a while but it was cooked to order, piping hot and very tasty.  Cathy had steak pie, chips and veg, me pork casserole, rice and veg.  The Farmer's bitter went very well with the food! Meals eaten we walked back to the campsite and retired to the van, Cathy reading and me plucking at the Uke.  Another early night, but we're happy to crash out with a full belly and a good book. 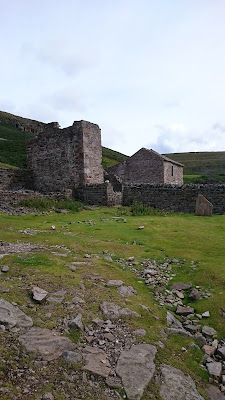 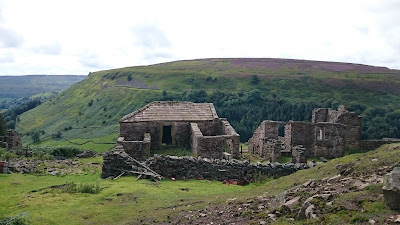 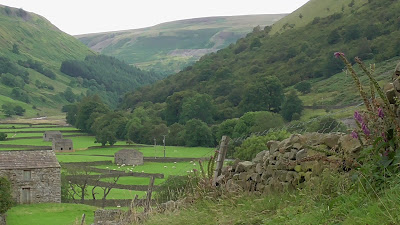 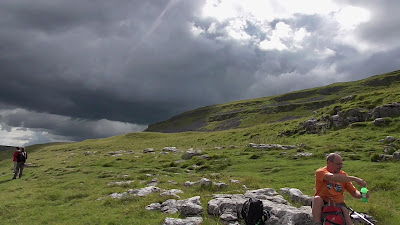