Nido's parked up with four other vans in an area reserved exclusively for motorhomes and campervans at The Twice Brewed Inn, within view of Hadrian's Wall and close to Vindolanda Roman Fort.  This pub allows overnight stops for a fee, although some of this is reimbursed if you eat here.  I called them yesterday and bagged the last parking spot and also a table for 6.30pm.

Yesterday we drove from Worston up to Alston, in the North Pennines.  On the way up we stopped off  at Hartside Summit (1903 ft) for lunch.  Onwards, we arrived at our overnight stop, which was the Nook Farm Shop and Cafe just north of Alston. They charge £5 to stay (no facilities although the shop toilets are available when it's open) and have space for about five vans; two were already parked up when we arrived.  The shop is also the parking area for visiting Epiacum Roman Fort.  It's a short stomp up the hill and needs a bit of imagination to envisage what it would have looked like. The views from the fort were all around and even Salty enjoyed the vista and sense of history!

Epiacum was built in the AD 120s at about the same as Hadrian's Wall.  It's suspected the Romans built the fort to control mining of the lead-rich mineral veins of the North Pennines.  Around 500 soldiers were stationed there and a bustling civilian settlement grew up around the fort.

The shop closed at 5pm and, apart from passing traffic, we had a quiet evening sat outside in the sunshine.  Taking Salty for his final walk of the evening, there were curlews and lapwings flying low over the moor. 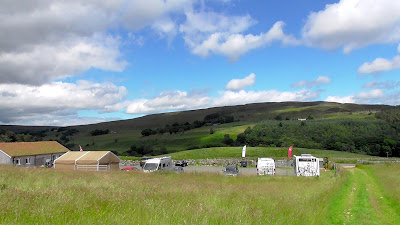 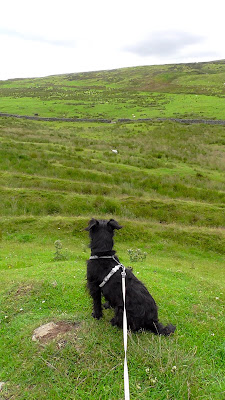 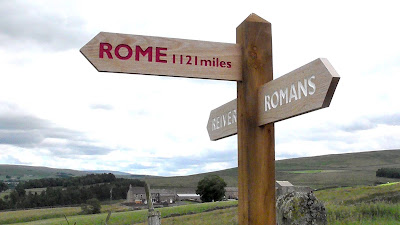 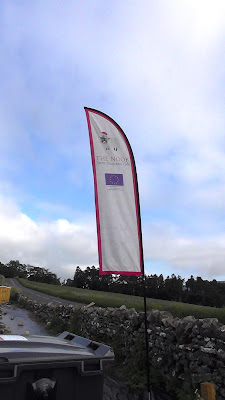 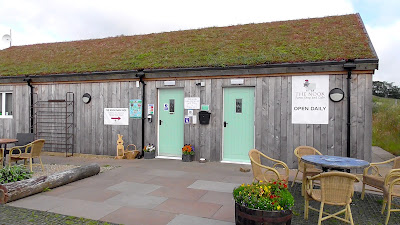 After breakfast we drove the short distance to Vindolanda Roman Fort.  We visited here in 2012 - on our first ever motorhome trip - and a lot of excavation has been completed since then.  We left Salty in the van and paid the £8.50 per person admission charge.  The site has grown a lot since we last visited and archaeologists were excavating new areas.  They and volunteer guides were very generous with their time, talking about the history of Vindolanda and what's been found over the years.  Although this time we didn't visit the indoor museum, which is on a different site, it would be well worth a visit to view some of the thousands of items dug up over the years.

The Twice Brewed Inn was only a few minutes drive away.  I parked up next to a motorhome and popped in to let them know we'd arrived and that we'd be in at 6.30pm to eat. I was given a parking permit along with the entry code for onsite showers and toilets in a self-contained unit just behind the parking area.  They are really trying to embrace and encourage van life and it's great to see.  We walked across the road and up a lane to join the footpath that runs alongside Hadrian's Wall.  To the east, the wall runs across the top of steep cliff escarpments towards Housesteads, said to be the most complete and best preserved Roman Fort in the UK.  The temperature had increased markedly during the day and the sun was out, so we took the western path, with gentle climbs up to a Trig Point overlooking the moors and looking down towards the pub.  Sections of Hadrian's Wall have survived and we stood and marvelled at their construction.  We'd taken a flask of tea with us and sat with a cuppa, enjoying the view.  It was a bit hot for Salty (who's wearing a thick black coat!) and he had to stop a few times to 'sploot' in the long, cool grass on the way down.  The blue bucket was therefore deployed for its 102nd use, acting as a cooling pool and he looked crossly at us once soaked and disappeared into the darkness of the van cabin footwell to sulk!

Showered and changed, we left Salty in the van and wandered over to the pub. Although it's dog-friendly, Salty is a rescue Patterdale Terrier and we're not sure if he's pub-friendly!  So the easiest option was to leave him in peace in the van. It's the first time we've eaten out since visiting our daughter and S-I-L in America in 2019, so we were a bit nervous, but it was well organised and felt safe.  Although the menu was standard 'pub grub' the food was very good.  They also have their own Brew House so we tried some different ales - all very tasty - and bought a box of three to take back to our neighbour, who's keeping our greenhouse watered.  As we were staying over in the van they knocked £5 off the bill, so another good reason to stay here. 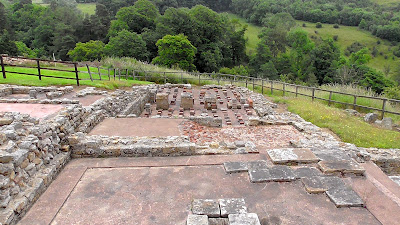 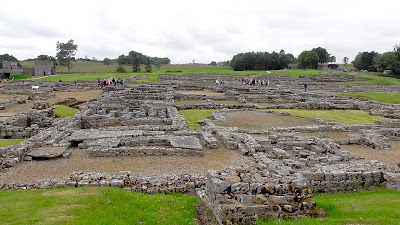 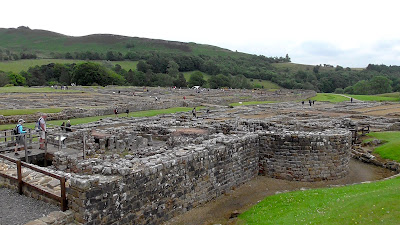 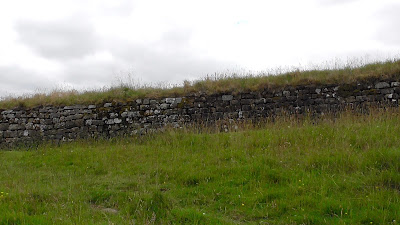 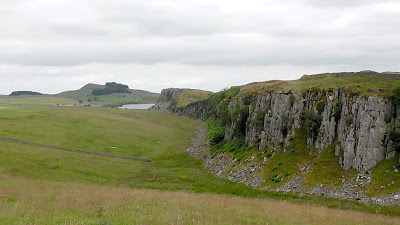 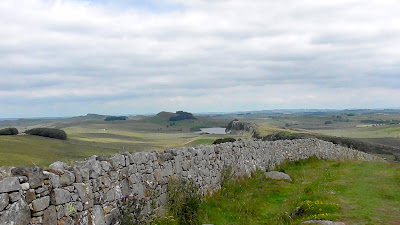 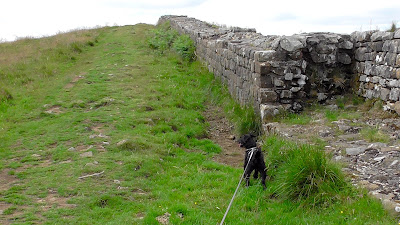 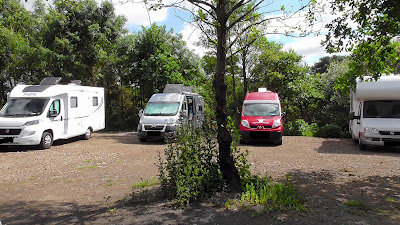 Back at the van, Salty was fine and pleased to see us.  The breeze has got up, cooling everything down pleasantly and we're sat in the van with the door open, listening to a lively game of metal quoits being played in the pub garden - the North East England version of French Petanque.
No comments:
Email ThisBlogThis!Share to TwitterShare to FacebookShare to Pinterest
Labels: northumberland, vindolanda
Newer Posts Older Posts Home
Subscribe to: Posts (Atom)