Grenay and all the things for free!


Nido’s parked up on a free aire in the village of Grenay, with space for three vans; we bagged the last spot.  The Council clearly decided they wanted to pull in the motorhome punters as, not only is it free to stay, but the fresh water and loo emptying is also free.  If that wasn’t enough, they also provide free unlimited electricity and free wifi!  Most of our gadgets are already charged up as we’ve only just left home, but we’re making the most of the wiggly juice to keep everything topped up.  To access the fresh water we need a ‘jeton’ (token), which can be picked up in many of the shops in the town displaying a sign to let you know they have them.  In our case, we stopped off at the boucherie and bought a few local sausages and asked for a jeton, which was happily passed over by the butcher.  So it’s win, win all round.  This is why we love travelling around France in our camper van.  There are literally thousands of places like this, not all are free though and not many provide all the facilities for free, but nevertheless it’s a very cheap way to travel.

The village is also home to the Maroc British War Cemetery.  We're in the middle of a region ravaged by World War 1 - Vimy Ridge and Arras are close by.  As with them all, this cemetery is immaculately maintained and a constant reminder of what happened here just over 100 years ago.  All of the gravestones around the outside boundary of the cemetery where soldiers of the City of London Rifles, all killed on 25 September 2015, the first day of the Battle of Loos.

We left Anglesey at about 1000 yesterday in squally rain, which worsened as we travelled south.  We stopped a couple of times to eat and have a stretch, finally arriving in Ashford some ten hours later.  By now the sun was out and we parked up in a Tesco car park, just ten minutes drive from the Eurotunnel Terminal.  We had an hour to kill, so topped up with diesel and had something to eat.  We arrived at the  Terminal two hours before our allotted departure time but, on this occasion, no earlier crossing was offered, so we caught the 2250 and reached Calais at 0025 French time.  A quick drive to the motorhome parking at Cite Europe and we were soon tucked up and snoring after a long day.

More rain this morning (this was a common theme on our three-month trip to France, Spain and Portugal last year!), but it was only a very short walk to the Carrefour supermarket to buy a few French provisions and grab some Euros from the ATM.  Then we were on our way.  I only intended a short drive today after a long journey yesterday, hence the stopover here in Grenay, only a couple of hours from Calais.  So today we’re just chilling out, getting ourselves sorted and into the campervan ways of life again.  We’ve been refreshing our French using the Michel Thomas course (it surprised me how much I remembered), interspersed with the odd Welsh word or phrase (we need to keep practicing that too!).  So at the moment we’re sat in as the wind and rain batters the van, with occasional warm sunny spells.  We’ll make the most of the free electricity and water for showers and topping up the gadgets before heading off tomorrow.

We’re away for two months on this trip, spending the whole time in France.  We have a loose plan of where we’d like to head for, based on some amazing wild swimming spots in the Wild Swimming France book. So the idea is to head for the Jura area first, then work our way south towards Provence, the Ardeche, the Carmague and Languedoc region, before eventually meandering back north.  But it’s a very loose plan and we’ll follow our noses…..and the sun!  In the past I’ve made the mistake of trying to cover too much ground, especially on a two week holiday when we were working.  So this time we’re going to take it easy and, if we find a nice region, just hang around for a while and get to know it.  Cathy’s looking forward to finding some of the local plant and insect life, while I’m hoping to enjoy some good bike rides. 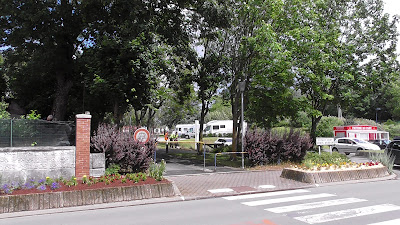