Nido’s parked on a flat grassy knoll right next to the beautiful sandy and rocky Uisken beach on the Isle of Mull.  This is a wild camping spot - £2 per person per night, paid to the friendly Mrs Campbell at the Uisken Croft just up the hill. It’s been raining most of the evening and set to continue through the night, but it’s still a peaceful, magical spot; we have it all to ourselves.  The tide was out when we arrived but with the waves crashing on the rocks out in the bay.

We stayed by Loch Lomond last night, having driven across the hills and up the motorway, past the craziness of the junctions around Glasgow.  Loch Lomond was a bit of a disappointment; for some reason I expected places to be able to pull over and walk alongside the water, but our route took us up the west side where the busy A82 is the only route, with no footpaths.  Our stop for the night was at Inveruglas Visitor Centre, having purchased a £3 camping permit online the night before. It’s a visitor centre (ie some leaflets on a shelf) and public toilets, with a wooden viewing point looking south across the Loch.  There’s a hydro-electric plant across the road, with the wide water pipes climbing the high hills above.  The view point is a stopping off point for the tourist coach trips; I think the Americans and Japanese were a little bemused by the constant rain showers, but in between we had some lovely sunny spells and blue sky. So yesterday was a bit of a transit day.

I think we may not have stopped over at Loch Lomond if I hadn’t bought the camping permit in advance.  I’m finding it hard to get out of the habit (and my logistics training) of thinking ahead, having a plan (and a fall-back).  Cathy’s always good-humouredly chiding me for it, but I worry we’ll be stuck with nowhere to stay.  The downside is that I become focussed on the destination rather than the journey.  I’m currently reading a book on my kindle about a lady who walked the St James’ route on the Camino  de Santiago Compestela (an area we covered on our travels through Northern Spain earlier this year).  I’m in no way religious, but I do get how the journey is spiritual; maybe I’ll walk a similar camino one day.  One thing she’s learned as she walks the route day by day,  is that you cannot look too far ahead - you must focus on being in the present and make the most of today.  Maybe that’s what I need to do more (blimey, that was a bit zen!).

This morning we were up with the alarm at 0700 and on the road by 0730.  Stopping off on the way to admire the powerful beauty of the Falls of Falloch, we carried on north along the A82, stopping at a quiet car park for a bacon butty and a cup of tea.  The road took us through some small villages, past lochs (and through the rain!) until we arrived in what felt like the busy metropolis that is Oban.  The Tesco superstore was doing a good trade and quite a few van owners were doing similar and topping up.  We arrived at the ferry terminal and I popped into the office to collect our tickets, booked and paid for online.  It would have been a lot cheaper without the back rack (without which we would have been under 6m), but still not a bad cost for a 45 minute return trip.  The ferry wasn’t too busy, a few cars, one other campervan and a coach load of Italians and Americans.  It stayed dry enough for us to spend some time on the upper deck, enjoying the view and the fresh sea air.  There was another short, sharp shower as we returned to the van, but the sun was shining as we drove off at Craignure and turned left to join the main road to the south.  The A roads on the Isle of Mull are mainly single lane, with passing places roughly every 200m.  It’s surprisingly stress-free driving on these small roads - much less than a narrow two-way road - and most people were considerate when pulling over to let each other pass.  Only one car refused to give way, forcing me to reverse back up the hill, until he and his miserable looking wife could pass - no friendly wave to that one!

We passed a lovely sea loch on our right, with the mountains climbing the other side.  It looked perfect terrain for otters and there were road signs to beware of otters crossing!  The valleys and fast flowing streams also looked ideal terrain for bears if they existed here - we could imagine one bounding around in the water trying to catch a salmon.  During the brief sunny intervals the mountain rocks shone against the myriad matt colours of the hills. About 27 miles down the road, we turned off on to another single lane road, before turning off into an even narrower road - albeit still with plenty of passing places - to arrive at Uisken beach.  I parked at the bottom and walked up to Uisken Croft to ask permission from Mrs Campbell to camp and paid our £4.  This is an absolute bargain for such a stunning location; we couldn’t quite believe how lovely it was.  First thing was a barefoot walk on the beach and paddle in the (a little colder than Anglesey!) sea.  However, the rain soon started to sheet across the bay and we retreated to the van for a brew and warm up.  Dinner tonight was paella, cooked and eaten indoors, but what a view from the galley door!  We’re hoping for a lull in the rain later so we can step out and enjoy the peace and solitude.  The tide is almost in now and lapping the stones and sand just a few feet away from Nido’s tyres.  It should be a quite and peaceful night. 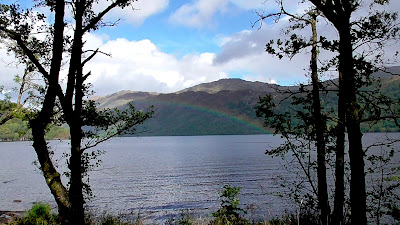 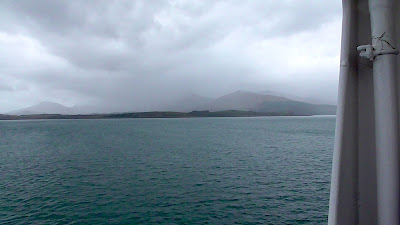 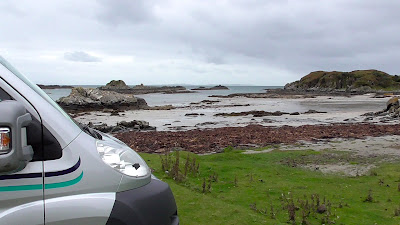 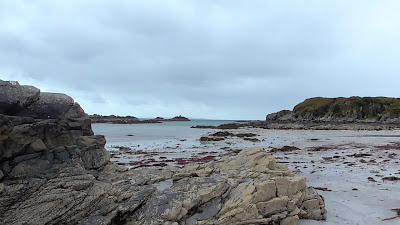 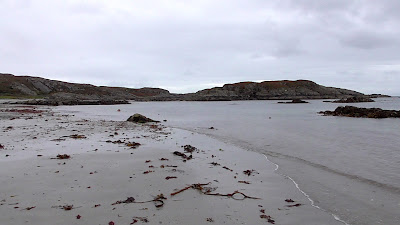 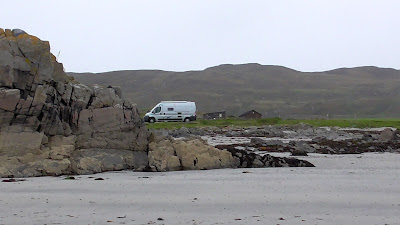