It's been a busy day

It's been a busy day.  Nido remains parked at the free aire by the lake in Favières. Man - it's so peaceful here.  The beauty of this part of France is that it's pretty much untouched by tourism; most tourists pass it by, if visit at all.  Downside - no café stop on my bike ride, upside - unspoilt countryside, beautiful villages and not a soul speaks English (except for one young girl at the lake paying booth), which means we've had to be brave and try out our French - and we've done OK.

The neds stopped doughnuts and wheelies in the car park at about 2300 last night, although they were replaced by the French Air Force doing aerial doughnuts into the night.  How did I know it was the French Air Force? Simple - the RAF don't fly after tea and certainly not after beddie-byes time! It rained a little in the night but remained warm, yet we woke to clear blue skies - again. I was off for a bike ride, so made myself a large breakfast - smoked salmon, scrambled eggs, pretzel, banana and nectarine - and a cup of tea.  Cathy also had a cuppa propped up in bed.  With my trusty steed off the rack, pockets and water bottle filled, I cycled out of the aire, turned right and uphill - and instantly regretted that large breakfast! The first 20 minutes of my ride seemed all to be uphill - something my digestion didn't appreciate- but eventually I was in the rhythm and loved the gentle, stress-free ride on smooth, quiet roads, through forests, small ancient villages and huge fields of corn, wheat and barley - I love cycling in France! The villages were generally quiet and pretty run down, but with some well kept gardens and potages.  I cycled through a few, turning around at Autreville - 'Another Village' - had they run out of names by this one!?  I was looking for a coffee stop, but this area is so far off the beaten track, that most villages don't have a tabac or boulangerie, never mind a café.  I rode a different route back, which was much shorter, and was soon back in Favières.  I carried on down the road towards the 'village fleurie' of Gelaucourt.  But on the way I came across this familiar face, who had already been and was on the return trek.  So being the gallant chap that I am, after exchanging pleasantries - she knows what I mean! - I rode back to the van to put the kettle on.

We enjoyed our brew sat in the sunshine. I locked my bike on the rack, washed out my kit and hung it out to dry. We packed up our swimming gear and walked the 5 minutes to the lake.  This is such an excellent facility. The toddlers area was full, plus an area on the far left for the school camping groups to paddle in canoes and capsize each other.  We picked an area in the middle, spread our 'blankie' and towels on the grass in the sun and went for a swim.  There was an artificial beach which led into the warm lake. We love swimming in fresh water and were soon out of our depth and floating close to the reeds, with dragonflies buzzing around our head.  It's amazing how different a perspective you have at water level. We spent the afternoon swimming, sunbathing and walking back and to along the beach. The FAF continued their practice strafing runs - I recognise every French warplane silhouette from my Falklands War enemy plane recognition training  (despite the 34 years past) - as the French provided the Argentinians with most of their planes, although they didn't like our Seawolf missiles!! Later on I bought us an ice cream and asked the ageing restaurant waiter (think of a grumpy Antonio Carluccio!) what time they opened for dinner tonight. At the back of the restaurant we made use of the free but cold outdoor showers - and the shower gel secreted in our rucksack - to have a good dhoby and hair wash - I think we're turning into proper 'on the road' hippies!

Back at the van, wet gear was hung out to dry and we enjoyed a brew and a read in the sunshine. Cathy in the meantime (when I was cycling) had stripped the bed and cleaned the van, so she made up the bed with clean sheets, ready for 'fresh hay' tonight. Changed and smelling clean (unusual for us hippies!) we walked back up to the restaurant, overlooking the lake and hills. Antonio was still on watch, but was now joined  by another, younger waiter - perhaps in his early 60s!? We ordered our food and an apero of beer (Cathy) and pastis (me).  Starters arrived, soon demolished, as were the mains and puddings.  I'd initially struggled to be understood here during the day and realised now that they spoke another 'version' of French - closer to German (Alsatian?). For example, 'Antonio' referred to Cathy as 'frau' rather than 'femme' - unless of course he thought 'we' were German. Still the food was good and we worked our way into their favour with good humour and pidgeon French.  At the end of the meal I went inside to thank them all for a good meal and bought them all a drink - whisky for Antonio, pastis for his oppo, beer for chef and a juice for (about 13 year old) mini-chef.  I learnt long ago that if you look after your chefs and stewards, they'll look after you.  I also ordered a Calvados for myself and, after some fun and laughter with them, the bottle was plonked in front of me to finish off gratis - so forgive any spollang mostwkas in thps bleg!

Back in Nido, Cathy's asleep and it's very quiet outside - clearly the neds and the French Air Force are having an early night. It's been a very relaxing couple of days in an area of France unspoilt by mass tourism.  We've loved the lake wild swimming and friendly locals; Lorraine is an area to which we'll definitely return.  Although we could have spent nothing over the past two days, by paying for the lake swim and eating in the restaurant, we've put something back into the local community. Tomorrow we transit west, with our next stop planned for another free Aire at another swimming lake - this time in the Champagne region. We plan to buy a bottle ready to celebrate our impending final mortgage payment - another step closer to FIRE.   Until then, it's another relaxing, quiet, replete, sleep time in France - bonsoir. 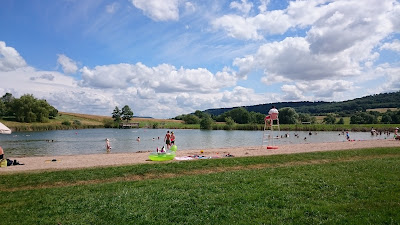 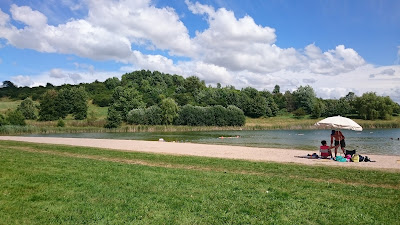 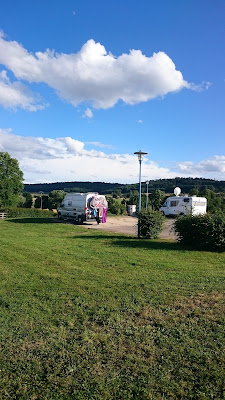 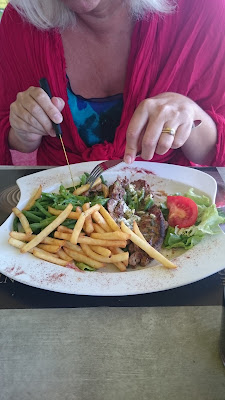