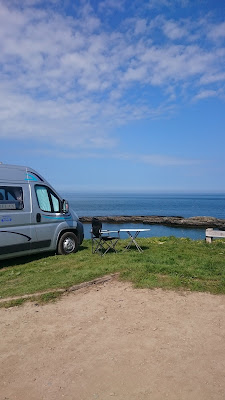 Friday 3 June 2016
We had such a great time in Llŷn last weekend, we decided to return. On our coastal walk we'd come across a lovely swimming cove where boat owners could also launch.  There was a car park above, so we hoped there would be somewhere there to wildcamp for the weekend.  The traffic was good to us and, although I made a few wrong turns at the end, we eventually arrived about an hour before sunset. There was one old blue VW campervan already parked up and I managed to pull up next to it, shuffling back and forth until we were reasonably level. We were in a great spot, pointing west and facing the mouth of the cove and the open sea. Cathy had already cooked our meal at home, so it just needed warming up and we ate sat outside watching the sun gradually sink towards the sea. It was a cloudless evening and the sunset was spectacular - aside from the Caribbean probably the best we've seen. We were tired after work and the drive so after a brew, headed off to bed to read, falling asleep to the gentle sound of the sea. As we were nodding off an old VW campervan turned up, with two guys and two collies; they pitched a small tent next to their van and soon all was quiet again.

Saturday 4 June 2016
We slept well and I was up at 0800, making us a brew - Cathy had hers in bed and I poured mine into my travel mug. Time for some fishing!  I'd brought some basic sea fishing gear - not perfect for light rock fishing but good enough. The rocks were pretty rugged and sharp so I took my time getting to the waterline. The tide was on its way out but I was still able to spend a good hour or so spinning, watching the wildlife, including sea birds and an inquisitive seal that kept popping up to have a look around. A local fishing boat was checking its crab and lobster pots.  The sea was calm and soon the hot sun was beating down on my back.  Although I caught nothing I enjoyed fishing again and need to get some suitable LRF tackle.

Back at the van Cathy was cooking breakfast - scrambled eggs with crispy bacon and toast. I had a packet of filter coffee - just add hot water - and we ate our breakfast in the sunshine, watching the tide ebb. It started to get busy later as the day trippers and boat owners arrived, carefully reversing their trailers down the narrow, steep slipway to the beach.  We enjoyed sitting in the sun reading and chilling. Mid-afternoon we headed down to the beach for a swim.  The sea felt cold on first entering (I certainly felt it more than Cathy!), but we were soon swimming together in the calm sea, with the rocks above and the kelp around our feet. We noticed our breath steaming as we swam - really strange! There must have been some cold sea air coming in - it looked like we were swimming in Winter. After a good half hour swim we wandered around the beach searching out sea glass as we dried. All showered, we enjoyed a beer before I prepared and cooked dinner on the Cadac BBQ. I headed off for some more rock fishing (no luck again but I enjoyed the peace and solitude). We sat outside with a cuppa, watching the two guys in the VW catch plenty of dogfish. It was quite cloudy by now but, at the last minute, the sun popped out under the clouds and provided a stunning finale as it sank into the sea - perfect end to a chilled out, relaxing day.

Sunday 5 June 2016
It was warm when we woke - already 27'C in the bedroom area of the van, so skylights were opened to another clear blue sky day.  I was 'up and at 'em', heading out for another hour of so of splashing a fishing lure into the sea without success!  But, hey, the view was amazing, the sun warm and the sea flat calm - I was completely chilled out.  The local seal was again popping up near the rocks to take a look around and the fishing boat was out checking their pots - just another day in this lovely place.

It was my turn to cook breakfast - this time mushrooms, bacon, fried bread and eggs.  Not exactly healthy but it set us up for the day. We took a wander over to the other cove with the sheds and winching gear.  This was a suntrap and the heat was bouncing off the pebbled beach as we mooched around and I skimmed the odd stone or two across the flat water.  It was very clear and looked perfect for swimming, so we returned to Nido to get changed ready for a cove swim.  The tide had only recently turned and we had to wade waist-deep to reach the small sandy beach, so it made sense to just dump our gear and carry on with our swim!  It was cold but we were soon used to it and swam along by the rocks until we reached a larger inlet I'd seen on my earlier fishing trip.  It was quite rocky and slippery underfoot, but we were wearing swimming shoes so this helped. It was great to float around in the water, completely enclosed by high granite rocks.  Back on the beach we read and sunbathed before finishing off with a quick final swim - it felt a lot colder so we didn't stay in long.

At the van we sat outside to enjoy our lunch, watching the comings and goings of cove visitors.  Our campervan neighbours (I'd say they were late 60s) had been out on their fishing boat a couple of times and I chatted to them. They spent winters in Spain in their van and had been 26 times so far.  He was also a keen road cyclist and always followed a mountain stage of the Tour de France, arriving several days early to find somewhere to park.  Sounds like the perfect life! I gave them the rest of our fresh water (a valuable commodity when wild camping) and we reluctantly packed up the van ready to hit the road - we really didn't want to leave.  On the way out we drove down a small road in a lovely lane to do a 'drive-by' of a cottage we'd seen for sale - with a large garden and room for several Nido's it would have been perfect if we'd been ready to locate.  The drive home was lengthy and hot, with numerous traffic jams and some crazy overtaking from the orange-skinned 'Abersoch Mafia' in their audis and chelsea-tractors!

Another great wild-camping visit on the Llŷn, where a weekend's relaxation feels like a whole week off work.  We love this part of Wales, with beautiful, unspoilt countryside and its own micro-climate.  We'll be back soon! 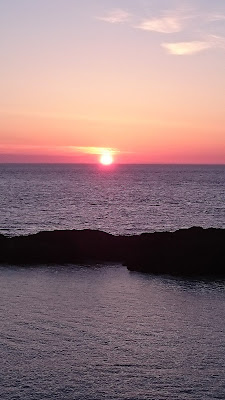 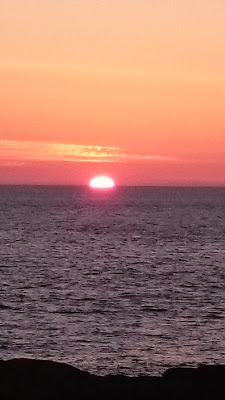 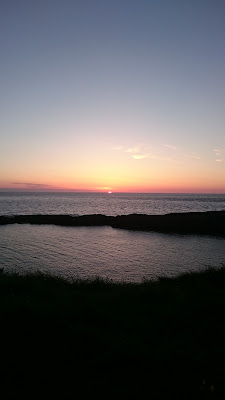 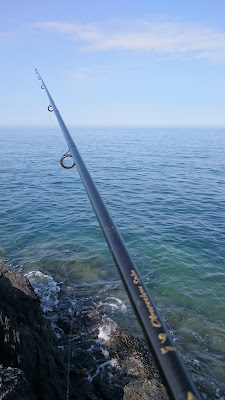 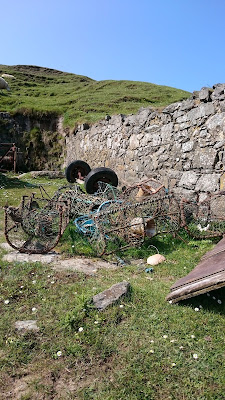 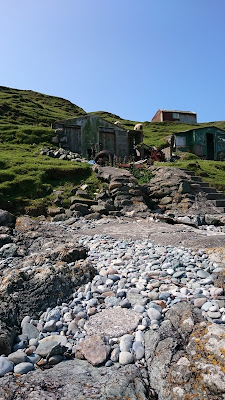