Chillin' by the Swale

El Nido's parked up right next to the River Swale, with the sliding door open and a great view of the flowing river and the hills beyond.  We're still on the Usha Gap campsite, but have moved from the big field to this much smaller grass area on the other side of the road and right next to the river.  I think this was probably the origins of the campsite, just a few pitches as a way to earn some extra income.  But no doubt the popularity of the spot, plus a lack of other campsites nearby, led to the growth.  It was certainly busy for the first two nights, but this morning nearly everyone had left, so we had the big field to ourselves, hence the move for our last night here to experience the 'cool camping' this site is known for.  We're also now very close to the facilities and with so few people camping, will make the most of the hot showers and washing up sinks.

The rain woke us at about 0630 this morning; Cathy had a read while I snoozed on for a while.  I made us a brew and we sat looking out at the campers packing up in the drizzle.  After breakfast we went for a bit of stomp, first checking there was space for us to move to the river pitches.  We walked along the road toward Muker, then turned off to cross the river on a small bridge and climb steeply up the hillside.  The path was hard to spot and we had to cross streams a couple of times, as well as stop for the odd breather, but the views north over Kisdon Hill and the campsite were outstanding.  We eventually made it to the top and followed a track downhill to Muker.  I couple of times I was chatting to Cathy (or so I thought!), only to realise I was talking to myself; she'd found some wild raspberries and was busily and happily stuffing her face!  At least it's a superfood and gave her the energy to walk back to the campsite.

Having moved the van we sat with a brew listening to the river (sliding door shut but galley door open due to the rain).  Cathy went off for a walk along the river and I stayed in to flick through my Camper Van Cookbook and just stare out at the great view as the clouds slowly moved across the hills.  The only downside is that I'd planned to go for a bike ride today.  I was aiming to take the road up to Keld, with some long, steady climbs and downhills, but this wouldn't have been much fun even with spitting rain; although that wouldn't bother me too much, there's nowhere in the van to dry or store wet cycling gear.  So I'll have to save the cycling for another day (I can hear my cycling Wingman - Ray - calling me a "Tart"!).  It rained on and off all day; at the moment the rain on the roof is louder than the y river. Cathy had a snooze while I practised some Uke chords, before cooking dinner - a sort of sweet and sour chicken with rice.  Cathy washed up over the road while I tidied away and swatted away the tiny midges who were now making a bee-line for any unprotected skin.  A large Mercedes selfie turned up, looks like a great van, plus a young chap in a small Romahome with a pop-up roof was parked behind us, with his collie for company.  Now, as the light fades and the rain gently falls, we're cozy inside, reading and thinking about whether to have some pudding with a cup of tea!  Tomorrow we move on, hopefully to a Britstop close by.  We need to ring in advance to check, but first we'll need a phone signal! 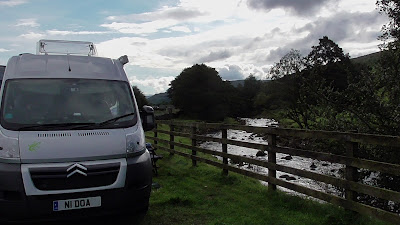 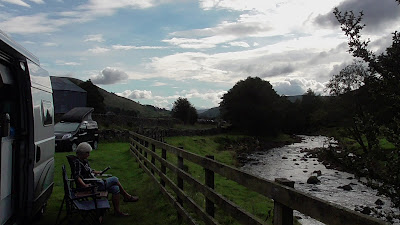