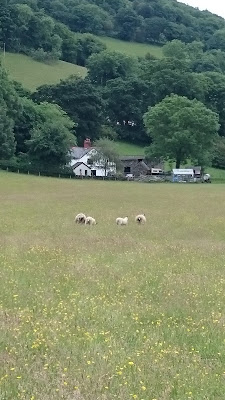 We'd planned a quiet weekend at home after two weeks away, plus another month of trips already planned in the van. But on Tuesday an email from Trusted Housesitters popped up, with an urgent request to help someone this weekend. I replied and the owner was soon in touch.  We talked through the gig and agreed to help out. This was to look after a country cottage in a beautiful valley in North Wales, with two elderly terriers, four chickens, a feisty cockerel and six ducklings who think Ted the terrier is their Dad!

After work, we drove from home into torrential rain - I mean like monsoon rain! It was very warm and we drove into Wales, heading steeply uphill out of Llangollen, before dropping down through several steep hairpins into the Ceiriog valley. We dropped down a narrow, fern-lined track down to the cottage. There were crumbling out buildings on our left. I pulled up at the gate and the owner met us, let us through and I parked overlooking the misty valley with sheep in the field.  Engine off and we were enveloped by ear-ringing silence. The dogs - Ted and Tom - met us at the door, excited to see new faces and we all got on well. We had a good chat over a cuppa and some lovely homecured ham and did the usual house sitting handover - pet feeding, keys, electrics. The owner had some work to finish so in the meantime Cathy made us all a lovely dinner of homemade pizza, salad and new potatoes, enjoyed with a bottle of white wine.  Tidied up, we headed for bed, opening the window to listen to heavy rain and some very unhappy sheep!

We woke early to a cockerel's crow and so were sat at the kitchen table, drinking tea and watching the bird life by 0630. Once the owner had left for her weekend we had breakfast and fed the animals.  We cleared some overgrown tree and shrub growth then took the dogs for a walk, through the fields, along the river and into the village.  Actually, if truth be known, we didn't know the way so the dogs walked us! Back at the cottage we sat outside in the hot, humid sunshine with a brew before I tied up the tomato plants in the greenhouse, while Cathy tidied up. As we worked there was the odd rumble of thunder and heavy rain started to fall.

I drove into Chirk to buy some food plus fish and chips for our supper - we were hungry! With the ducklings and dogs fed, Cathy had a snooze while I watched cycling on TV, with Ted laying next to me with his chin on my leg.  We have a few jobs lined up for tomorrow so, until then, it's time to listen to the silence of the deep countryside.

The next morning it was still cloudy with mist on the tops of the valley, but warm enough for shorts. The hens had laid a couple of eggs, which we enjoyed with bacon and toast for breakfast. Outside jobs today were weather dependent.  However we noticed Tom was holding his rear left leg off the ground.  We took a look and couldn't see anything apart from a little blood on the paw. So I rang the vet in Llangollen and booked an appointment for later. Tom travelled well in the car and he was soon examined by the vet, who thought something had pierced the skin but was not still in there and there was some swelling. A quick injection and some anti-inflammatory tablets to hide in his food and we were soon back at the cottage. The rest of the day was on and off torrential rain, so outside jobs had to be fitted around. But we did manage to sort out the compost heaps. Resting on pallets and with plastic in the bottom, there was no way for the worms to reach the composting material, which explained the slow progress and smelly stuff. We forked one full bin into the empty one, cleared the bottom and then forked it back, so with a double turning it should really take off now. We also tidied up around the allotment and checked on the greenhouse. I had planned to replace the topping stones on the dry stone wall, but it was too wet to safely handle them.

The rest of the day was spent reading and fussing over Tom and Ted. I cooked a very tasty lamb biryani and there was plenty left for the owner's return, so she doesn't have to cook after a long journey.  We watched some TV in the evening before heading off to bed.

More rain in the night and more forecast today! Spike the cockerel had a Sunday lie-in until 0730 so after that I was up to feed and water all the animals. This is our last day, so we tidied and cleaned up after ourselves, spending time looking out on the views of the hills and sheep and watching the many birds feeding in the garden during the rain and pottering in the garden in between. 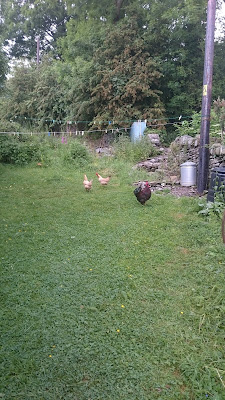 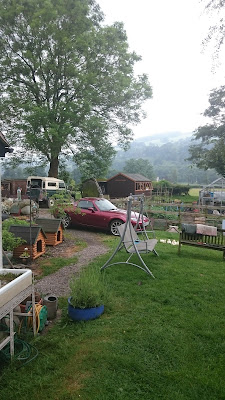 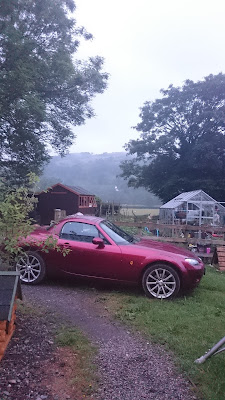 No comments:
Email ThisBlogThis!Share to TwitterShare to FacebookShare to Pinterest
Labels: housesitting, Wales

A few weeks ago we signed up to be sitters with Trusted Housesitters.  The concept's quite simple - in exchange for looking after an owner's home, pets and garden, we get to stay in their house for free.  It's something we plan to do a lot more of when we retire and are travelling in our campervan throughout Europe, particularly in France, Spain and Portugal. We created our Sitter Profile and started a search to find a local house sit, so we could try it out and start to build our reputation.  We found one just a few miles away from home, a family asking for someone to look after a house, pets and animals over the Easter weekend. I made initial contact via email and we spoke to them on the phone before visiting them one Saturday, several weeks before Easter - all was set. The owners had already emailed us the details of the animals to look after - 6 cats, 15 chickens, 2 geese, 6 rabbits, 6 guinea pigs and a few chicks - plus some eggs that might soon be chicks!

The original idea was for us to sleep in our campervan, mainly because their house is in the middle of a major refurbishment.  We could plug into their electricity, use their water and facilities and enjoy getting used to having our van in slow time.  Only one problem with that cunning plan - our van conversion was still not ready, despite several promises to the contrary (this is a long-standing saga which I may blog about in the future).  So instead we needed to sleep in the house; but at least there was a room which was available to use with us sleeping on a large, L-shaped leather sofa.

On the first day of the house-sit we arrived at about 0930, just as the owners were heading off.  The cats live in the house and the owners had already released the other animals into the electrified enclosure and fed them for the day.  We spent some time familiarising ourselves with the house, garden and animals, making sure we knew what we had to do and setting up a daily routine for feeding and looking after the animals.  The house was out in the countryside and very quiet with lots of birdlife - we loved the peace and solitude.

The house also had a number of out-buildings and lots of garden and land.  We're not the sort of people to sit around and, to be honest, we wanted a project to do to keep our minds off our delayed campervan conversion.  So we took a look around to see what we could do to help the family, who were basically living in a building site inside the house, with walls and ceilings down.  We thought if we could help out in some way this would make their task seem less daunting!  So we focused on the following areas:


On the first day we tackled some general weeding and moved the logs; it was a cool, drizzly day, so not ideal, but at least we were outside and we really enjoyed ourselves.  On the Saturday we cleared the cobbled patio and weeded it, clearing several barrow loads of turf and soil away and doubling the size of the area.  The owners now had a nice place to sit in the sunshine and enjoy an el-fresco meal or drink.  Cathy also pruned the old apple tree, cutting out all dead and diseased wood and removing all crossing branches to open it up. On the Sunday we tackled the outbuildings, removing loads of old wood and cardboard down to the bottom of their land and starting what turned out to be a large bonfire that burned all day.  This was the most satisfying!

This was also our first experience of looking after so many animals, apart from our own family pets in the past.  All needed feeding, watering and cleaning out.  This was made all the more interesting because the geese were territorial and spent a lot of time hissing at us; we'd been told to hiss back louder and wave our arms.  This seemed to do the trick and an uneasy truce was brokered!  The chickens scratched around in the enclosure, whilst the rabbits and guinea pigs stayed in locked in their runs, although the giant rabbit (and it was huge) was allowed out for an hour or so and enjoyed the chicken food!  The cats inside the house kept to themselves but let us know when it was feeding time, although it was a bit of a free-for-all! At night the geese had to be 'persuaded' to entire their coop so they could be locked in.  The chickens, however, put themselves to bed.  They also produced our breakfast every morning - can't beat fresh eggs every day!

We also had to look after some goose and chicken eggs in an incubator, turning the eggs three times a day.  Upstairs in the house were 2 brooders with a number of chicks that had recently hatched and they had to be fed, watered and cleaned out twice a day.  On the Saturday night one of the small bantam eggs hatched out and once the chick was dried off, we moved it to the brooder - an appropriate hatching over the Easter weekend!

The family were due back on the Easter Monday evening, so I dropped Cathy back home to sort out our own stuff, ready for work the next day, and I returned to keep an eye on things and feed the animals before locking up and coming home.  The owners were delighted with the outside work we did as they weren't expecting any of this to be done.  We really enjoyed being outside and doing something useful whilst looking after a house and animals.

Our first house sit was a baptism of fire to say the least, but we know we'll be able to cope with most things with future house sits and hopefully will build a good reputation.  We'll certainly be looking for many more house sits in the future, particularly when we start long-term travelling in our campervan.